Had someone told me a year ago that today I would be writing posts for an online art blog, happily drawing and painting, and sharing my work with others, I would have gotten a good laugh from that prediction. Never in my wildest dreams would I have ever imagined that any of those things would be happening.

My decision to learn to draw was a very spur-of-the-moment thing, an idea so absurd it didn’t even deserve any serious thought. I’m very glad I made that decision, and I’m glad, too, that I didn’t allow myself to think about it. If I had, I would surely have talked myself out of it. As it was, I had no reason to take myself seriously. It was all a big joke.

I expected to fail.

When I bought that first book — Drawing Lessons for Beginner Artists — I laughed, knowing I’d just thrown away ninety-nine cents. No big deal. I could afford that. I could afford, too, to pick up an inexpensive set of drawing pencils. I expected them to soon find their way into the back of a drawer — out of sight, out of mind. And even though I could afford to buy a little sketchbook, I hesitated when I saw the price. A sketchbook seemed almost like a commitment of sorts. It seemed like a lie, too. What was I going to do with a sketchbook? I couldn’t draw, and no matter how many “how-to-draw” books I read, nothing was going to change that fact. I grimaced, but I plunked down the money, bought the sketchbook, and wondered what in the world I was thinking.

What I truly expected was that I might do all right with the very first few learning exercises but that all too soon my lack of talent would become obvious. I would only get worse from that point on, and after a few days of embarrassing myself with my childish attempts, I would quietly put away that sketchbook and my pencils and forget that I’d ever tried learning to draw.

Needless to say, I’m amazed to be sitting here today in a little “art room”, surrounded by sketching pencils, oil pastels, erasers and pencil sharpeners, burnishers and blenders, and so much more. Astonishingly, I can even rattle off names like Winsor & Newton, Faber-Castell, and Derwent, knowing who makes what and where to buy them. Words like gouache, underpainting, and tortillon roll off my tongue. I can converse intelligently about the differences between Prismacolor Premier and Polychromos colored pencils. I not only know what art magazines are out there, I subscribe to several of them.

How did this happen?

Instead of looking back now at what I expected, it’s become a lot of fun to think of all the things I never thought would happen when I decided I should learn to draw. 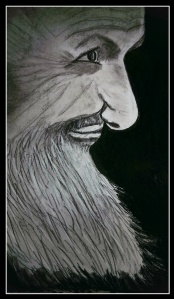 I never expected I’d someday have my own pictures hanging on the wall, like the “Old Russian Man” I drew last fall.

I never once expected anyone — friend or family member — to ask me for drawings.

I never expected anyone to call me “an artist”.

I surely never expected that within this first year, I would learn not only the fundamentals of drawing, but also go on to learn to use many different materials and learn many different techniques.

How wrong I was!

I’ve learned so much, and I’ve had so much fun doing it. I get up each morning and look forward to the time I’ll spend drawing and painting. So many times I’m amazed when I glance down, see a drawing in one of my sketchbooks, and think, “Did I really draw that?”

I would never have thought it possible, so this message is for everyone out there who has ever said “I wish I could draw, but I know I can’t.” Yes, you can. If I can learn to draw, anyone can learn to draw. If you have the desire, you can do it.

Please, pick up a pencil and begin today.