Since I’m studying art anatomy, of course the topic of skulls has come up in conversation. Sorry to say, I haven’t gotten around to drawing any skulls recently. I’m still working on arm bones, you know.

That’s not to say that I haven’t drawn skulls in the past. I certainly have!

My favorite holiday is Halloween, and every year we throw quite a party for the kids and grandkids. Last year, I’d just begun working with charcoal as Halloween approached. Oh, yes, drawing skulls would be so much fun! I couldn’t wait to show them off to the little ones. 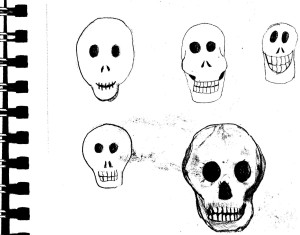 My first skulls weren’t too scary as this page from my sketchbook shows. They were fun to draw, of course.

One of the biggest problems I had when I started drawing with charcoal was that I found I was very heavy-handed.

Actually it was the same with graphite when I first began learning. Using charcoal, of course, only made the problem much more obvious, as this second skull drawing shows.

A little scarier? Well, maybe. The really scary part, though, was the awful mess I made with the charcoal.

I’m happy to say that in time, I did get better. I learned to apply both graphite and charcoal with a lighter touch.

But, back to skulls. I still wasn’t satisfied with what I’d drawn, so I kept at it and drew another skull.

Now, my skulls were getting a little scarier. I was pleased to see that I was making some progress.

I was doing these drawings in my small 5-1/2 x 8-1/2 inch sketchbook. Even with that size, I didn’t often devote an entire page to a single drawing. Usually I just sketched the same thing over and over on the page. I wasn’t much of an artist yet. I wasn’t really drawing, you see. I was just learning to draw.

It was around this time though, that I begin seeing definite improvement. With a little determination, I could draw something — like a skull — that looked like it was supposed to. My drawings have never been totally realistic, but I’d moved beyond the rudimentary stage where most of my attempts looked like cartoon figures or drawings made by a six-year-old.

Yeah, I went for it. I created what was at that time my largest drawing ever. Despite the gruesome subject, I was very proud of this skull.

If you look closely, you’ll see that I even signed this drawing down there in the lower right corner. That was another first. And yes, it was fun to have this hanging on the wall at Halloween.

Speaking of which…the holiday is only four months away. I know, that sounds like a long time, but my husband is already talking about our annual party and what we’ll do this year. Maybe we’ll have a skeleton theme. Lots of bones. Lots of skulls.

I just might be able to draw a few. Being an artist is lots of fun, especially when it comes to Halloween!