I hesitate to speak much of truth when it comes to art. There really are no absolutes. We have guidelines to follow and maybe a few natural laws to keep in mind, such as those involving gravity, perspective, light, and the color spectrum. Beyond that, we’re free to more or less do as we please, depending upon the results we hope to achieve.

Every artist has his or her own approach to drawing and painting. Your techniques and suggestions work for you but might be impossible for me to use. Likewise, my methods — and occasional madness — would probably leave you shaking your head in bewilderment. We each make our own way on this journey, and one artist’s truth can be another’s undoing.

Despite all this, I still persist in searching for certain artistic truths, much like the Greek philosopher Diogenes looked for a honest man. I hold my lantern aloft, hoping to cut through the darkness. So far, all I’ve found is confusion.

This painting, attributed to J. H.  W. Tischbein, definitely captures my emotions and speaks to me about the futility of my search. Still, like Diogenes, I doggedly continued.

My searching recently has centered around the concept of planes in art. I thought I understood the concept, but the more knowledge I gain, the less I actually know.

Here’s one definition: In perspective, the imaginary plane corresponding to the surface of a picture, perpendicular to the viewer’s line of sight.

Does that make any sense?

Here’s another definition: The plane of a painting, drawing, or the like, that is in the extreme foreground of a picture, is coextensive with but not the same as the material surface of the work, is the point of visual contact between the viewer and the picture, and is conceived as a major structural element in the production of abstract or illusionistic forms.

The definition I like best follows the KISS principle, and keeps it simple, sweetheart. The picture plane, despite all the verbiage written around it, is the actual physical surface of the painting.

But it doesn’t remain simple for long, because once we understand the picture plane, we’re faced with the concept of ground plane. Then, of course, we have to deal with perspective, and it only gets worse from there. 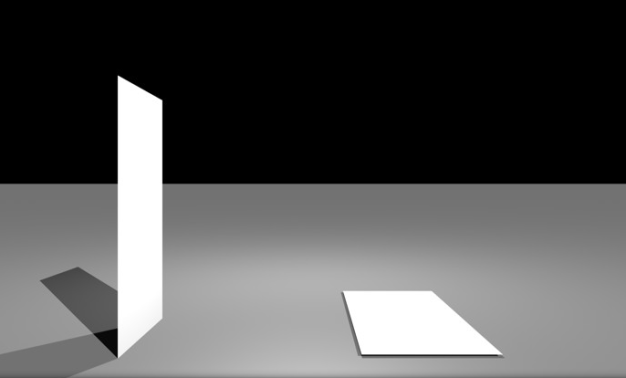 We have aerial perspective and we have linear perspective. And we have the old bugaboo of foreground, middle ground, and background. Unfortunately, we don’t have much agreement about these concepts, their meaning, and their application in art.

Let’s start with Joan Hoffman. She compares foreground, middle ground, and background to a staircase and comes around to calling each a separate plane — at least, if I’m understanding her right. But then she declares that nature has one value per plane, and sorry, but that plane just took off without me. One value per plane? Yes, according to Hoffman. “Each plane, she says, “can have many different colors, but only one value.”

My mind rebelled at the thought. When we look at a sky and see clouds, are we truly seeing only different warm and cool colors, all of which have the same value? And look at the foreground. We have lights. We have shadows. How can these possibly all be the same value?

David Rankin appears to agree with Hoffman, so what do I know? Obviously, not much. Rankin does away with the staircase analogy, and refers to foreground, middle ground, and background as spatial planes. Indeed, we’re still dealing with planes here.

According to Rankin, “The darkest elements of any painting can be placed in any one of the three spatial planes.” He goes on to warn that “Identical values should not be placed in any two planes, only one! Otherwise you will flatten and weaken the illusion of spatial depth.”

To clarify his point, he offers a helpful illustration of values in spatial planes:

I’m sure there’s a lot of good advice here. I’m just not quite sure I can strictly follow these rules about having a single value per plane. I mean, seriously, folks, look at a standard value scale:

Am I to confine myself to only three values in a painting? To me, the idea is absurd, but again, what do I know?

I know that I’ve suddenly developed an artistic fear of flying. I’m now terrified of planes.

John Carlson has helped me work through a lot of confusion with his teachings of planes as various angles within a painting. It’s a much different approach, but for me, a much more logical one. For Carlson, it’s all about light and consequently about the values we see.

The sky is the source of light. It is, therefore, our lightest value. The light from the sky falls directly upon the ground. The ground, therefore, becomes our next lightest value. We have hills in the distance that appear at an incline. They receive light indirectly compared to the ground. They are, therefore, the next step on our value scale. We also have trees — or other upright objects — which don’t receive direct light from the viewer’s perspective. These upright planes, therefore, are our darkest values.

This is all referred to as Carlson’s “Theory of Angles and Consequent Values”. In summation, we have four groups of values affecting three major planes — the horizontal ground plane, the angled plane of hillsides, rooftops, or other sloping objects, and an upright or perpendicular plane.

That helps me a lot, yet it doesn’t erase all the confusion. I want to think that I can have various value steps on a single plane, so long as I stay within an appropriate range of light, mid-value, and dark. That makes sense to me. This Theory of Angles and Consequent Values does get a bit overwhelming, though, when I consider that a painting might have trees in both the foreground and the middle ground. Are distant hillsides part of the background? Or are they also considered middle ground?

Sometimes as I prepare to paint, I feel more like a mathematician, carefully calculating angles and values, and in the end, of course, art can’t be reduced to mere arithmetic. This isn’t paint by numbers. Art is about painting with emotion and intuition. Yet landscape painters and other representational artists must also paint with understanding. We do need to follow natural laws, at least to a degree. And that means understanding the various spatial planes and how they are affected by light. It means understanding the laws of both aerial and linear perspective.

I suppose it means searching for our own truth in art. I haven’t yet found mine, and so my journey continues.