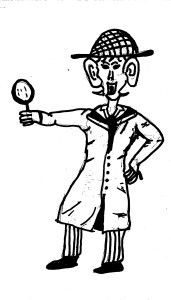 The fellow I drew for the stretch prompt didn’t turn out quite as long and stretchy as I’d first envisioned him. I turned my paper the wrong way, too, and that didn’t help his physique.

Still, I’m very happy with Detective Stretch who has stepped onto the scene and has solved the Case of the Missing Mother. Yes, sad to say, she met with an unfortunate end and it was, indeed, Cruel Stepfather who is guilty of this heinous crime.

For what it’s worth — if you must know the gruesome details — he used the gun, not the knife, and to set the record straight, Fat Uncle George had nothing to do with it. But he’s going to jail, too, for the theft of the pearls.

As for Exploding Brain Boy, he’s using the insurance money to fund his college education. He and his best friend Joe the Weakling — who has now successfully built up his body so no one dare kick sand in his face again — are headed off to the university where Exploding Brain Boy will put his gray matter to work studying mythical zoology. Joe plans to major in physical education, of course.

And what of Killer? His story has a happy ending. He now belongs to Detective Stretch and will surely become a great crime dog, sniffing out bad guys wherever they are.

I think that more or less wraps up the story — which I never intended to create — and maybe a few details are a bit wonky, but that’s how it happened, you know.

As for Detective Stretch, I had fun drawing him. His body didn’t get as stretched out as I’d planned, but he did get stretched ears, a stretched nose, and a long, stretched neck. I had the most fun, though, dressing him in those striped pants, his button-down coat, and that fancy hat.

I’m sure it goes without saying (but I’ll say it here anyway) that my Inktober detective was inspired by the fictional detective Sherlock Holmes. So, here’s today’s EDUCATIONAL INFO:

The character of Sherlock Holmes — created by Sir Arthur Conan Doyle — was based on an actual person. Holmes, a consulting detective, was based on Dr. Joseph Bell, a renowned forensic scientist at Edinburgh University. The author had studied under Dr. Bell.

My Detective Stretch is different from the other characters I’ve created this month in that I planned him out and knew his story before I drew him. He was intentional, not accidental. For my own sake and sanity, I needed closure for the characters I’d drawn and the disturbing storyline that developed around them. Detective Stretch did an admirable job of solving the crime, and for that, I’m grateful. And all of this might even be believable with a little stretch of imagination. So there you have it!

There are still a few days remaining in Inktober, and I hope to have fun with the last few prompts. Inktober has been quite an interesting experience for me. The best part about Inktober is that I really am going to make it through the entire month.