When I was very young — three or four years old — I had my first introduction to fine art. It came in the form of a simple puzzle with probably no more than twelve or fifteen pieces. Putting puzzles together was one of my favorite things to do, and I loved this touching scene.

The painting is The Child’s Bath by Mary Cassatt. Although she was born in Pennsylvania, she traveled to France to pursue training in art and she remained there for the rest of her life except for occasional visits home to the states. Cassatt became the only American artist to display with the Impressionists.

Her subjects were women, children, and the quiet beauty found in the everyday moments of life. This was the world Mary Cassatt knew. As a respectable woman in the late 19th and early 20th centuries, she faced many restrictions, and her art was occasionally dismissed as being too feminine, yet her technical skills were obvious, as was her gentle insight into the scenes she painted.

Her work made use of a lighter palette than many of her male counterparts, and she was also influenced by Japanese art. She chose to work in many different media, and her versatility helped to establish her reputation at a time when few women were taken seriously as artists.

Another significant painting by Cassatt is one of her sister, Lydia, perusing the morning edition of the newspaper. We may see it today as simply a painting of a woman reading, but this was done at a time when women’s roles were changing, education and  literacy were becoming important issues in their lives, and they were becoming more aware of and involved in current affairs.

The painting was made with a light, almost airy palette using quick, feathery brushstrokes. 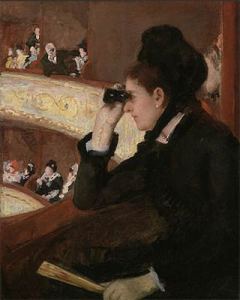 One of Cassatt’s most highly-praised paintings was In the Loge. It was exhibited in Boston in 1878. A critic remarked that her work “surpassed the strength of most men.”

The painting depicts a fashionably-dressed woman attending a theater performance in Paris. She lifts a pair of opera glasses to her eyes, as a man several boxes down regards her through his own glasses.

An analysis of this painting from “The Art Story” tells us:

Cassatt has perceptively grasped the fact that the members of the well-dressed audience are putting on their own performances for one another. The main figure may be watching the stage or observing her fellow theatergoers while she herself becomes the subject of the man’s gaze; meanwhile, the viewer, who is placed just beside the woman, takes in the entire scene.

Despite living most of her life abroad, Cassatt remained an American citizen and worked toward women’s suffrage. As she aged, she developed cataracts that interfered with her art, and in the last decade of her life she was nearly completely blind. Even with her vision problems, however, she continued to fight for women’s rights. During the first World War,  she promoted humanitarian causes and worked to help wounded soldiers.

Near the end of her life, she remarked, “I have not done what I wanted to, but I tried to make a good fight.”

An excellent documentary on Mary Cassatt is available. The hour-long presentation is well worth watching.