OK, so where have I been and what have I been doing? I obviously haven’t been drawing or painting recently. So, what’s going on?

As a creative individual, I never have enough time to do all the things I love, so it tends to go in cycles. Right now, I’m in musician mode, and instead of spending time at my easel each morning, I’m sitting at the piano playing Beethoven, Bartok, Tschaikovsky and more. I’m having fun. Playing piano really is playing.

The most recent issue of Pianist magazine had a fun link to art — there are, of course, many, many connections between art and music. Since I’ve been absent from the blog here, I thought it might be good to pop in quickly and share this article and link. Now, I’m off to play a few pieces this morning. Later today we’re heading to Kansas City for the symphony. We’ll be hearing a performance of Rachmaninoff’s first piano concerto.

GREAT PIANISTS AT PLAY – Unpublished portraits and sketches see the light of day.

“Vladimir Ashkenazy (pictured). Sir Andras Schiff, and Andre Tchaikowsky are among the pianists diaplayed in portrait at a concert and exhibition of work by the artist Milein Cosman. 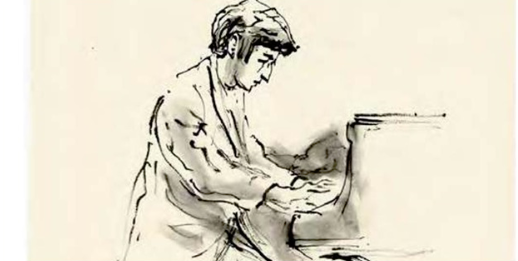 On her death in 2017, Cosman bequeathed 1,300 of her sketches and portraits to the Royal College of Music in London. Having fled Nazi Germany in 1938 with her husband, the musicologist and broadcaster Hans Keller, Cosman settled in Hampstead and moved in elevated musical circles. She captured musicians in image as precisely and readily as Keller described music in words, and from this skill arose pen-and-ink records of composers and preformers both in concert and in more informal contexts.”

The museum curator commented, “We were told by Cosman to expect a bequest, but did not know the scale of her donation. We know she was extremely fast at drawing, and didn’t look at the page while she was drawing. She was capturing immediately what she saw.”

You’ll find a few more drawings and additional information at the RCM website: