That question is purely rhetorical. I’m not asking you to point out all the flaws and weaknesses in my drawing and sketching. Goodness knows, I do enough of that on my own.

It’s about attitude, yes, and it’s about mindset, yes, but that’s only part of it. It’s also about expectation, and while that’s similar to attitude and mindset, it somehow works a bit differently.

Step back with me to June 2015, please. On that day, I stood looking at a beautiful new set of Prismacolor Premier pencils I’d bought. I’d purchased them so that I could do a bit of coloring in one of those “big people’s coloring books” that were becoming popular. As I looked at them, I was truly aghast at what I’d done. Who buys a complete set of artist quality colored pencils in order to do nothing more than color the pages of a coloring book? It was absurd. It was ridiculous. It was downright embarrassing.

Why embarrassing? Because I couldn’t shake the feeling that I had no right to own those pencils. They were pencils for artists to use, and I was anything but an artist. I was, in fact, one of those people who could not draw a straight line — or anything else — to save my soul. So how could I possibly justify owning that gorgeous set of Prismacolor Premiers? I couldn’t…unless I somehow became an artist.

So, I shrugged. I took a deep breath, and I uttered those fateful words. “Well, I guess I have to learn to draw.”

I said those words with a hopeful tone of voice, but at the same time, I didn’t believe I could ever do it. I’d tried learning to draw before. Many times before. And every time before I had failed. Nothing would be different this time. I would fail again.

The important point here is that I didn’t approach art with a positive, “can do” attitude. I didn’t have a “Yes, I can” mindset. Exactly the opposite. All I had was a “Well, I’ll give it a try, but I know I’ll fail” belief.

I bought a little how-to-draw book. I reluctantly spent a few dollars on a small sketchbook. I knew I was wasting my money. I could never learn to draw.

It was never easy, but I did see improvements, and gradually I began to share my drawings with my husband, my family, my friends, and ultimately — through this blog — with the world. Somehow that miracle had happened. I had actually learned to draw.

Not that I was great at it. I wasn’t, and I’m still not. But I had learned basic pencil skills. I could follow along with step-by-step drawing tutorials or lessons, such as the drawing course I took at The Virtual Instructor.

That is when, where, and how I began this art journey. It’s taken me to a lot of places — watercolors, charcoal and conte, soft pastels and oil pastels, acrylics, and oil paints — but no matter where I go with art, I find that strong drawing skills are a prerequisite for almost anything we wish to create. And, my drawing skills are still at a very basic level. If I want to go farther on my journey, I need to make those skills stronger.

And here’s where I find myself stuck, getting in my own way, and stopping any progress I might be able to make.

I think it’s largely because of expectation, and I know I’ve shared some of these feelings before. Expectation isn’t quite the same as attitude; it’s a bit different from our mindset, I think.

When I first started learning to draw, I expected to fail, and in a way I was comfortable with that. It was, for me at that time, a very reasonable expectation. Having that expectation looming over me made it a pleasant surprise when I saw myself succeeding. Little by little, the successes I made eroded all my negative thoughts and helped me see that I really could learn to draw. I might never be very good at it, but I could do far better than I ever thought possible.

It’s all different now. I’ve spent four years drawing and painting, and my expectations have changed. Now, I expect to succeed, at least to a degree. I expect to get better. I expect to see my drawings improve as I learn new techniques.

And exactly the opposite is happening. Where in the beginning my attempts exceeded my expectations, I’m now at the point where my efforts fall far short of my expectations, and I really don’t know quite how to get out of this awkward place.

What’s happening, you see, is that I’m giving up. I’m not even trying.

Recently I returned to The Virtual Instructor for another series of drawing lessons. These lessons are designed to help artists like me improve their drawing skills over the course of twenty-five days.

Feeling confident that I could do this, I gathered my drawing supplies and sat down for the first lesson. Each day’s lesson includes a mindset, and the very first mindset was to have a positive attitude, to believe in ourselves and know that we can accomplish our goal.

Yes, I felt a bit deflated, knowing my attitude wasn’t the best. But I continued listening to the lesson. Our first day’s assignment was a simple one, a way of helping us see the improvements we’ve made when we come to the end of the twenty-five days.

There was a reference photo provided for those of us who weren’t sure how to choose an appropriate object for the assignment. Had I chosen an object myself, I would most likely have picked something ridiculously easy, just to make myself feel better, I suppose. I didn’t want to do that, so I decided to go with whatever reference photo the instructor had provided.

I gasped when I saw what I was supposed to draw: 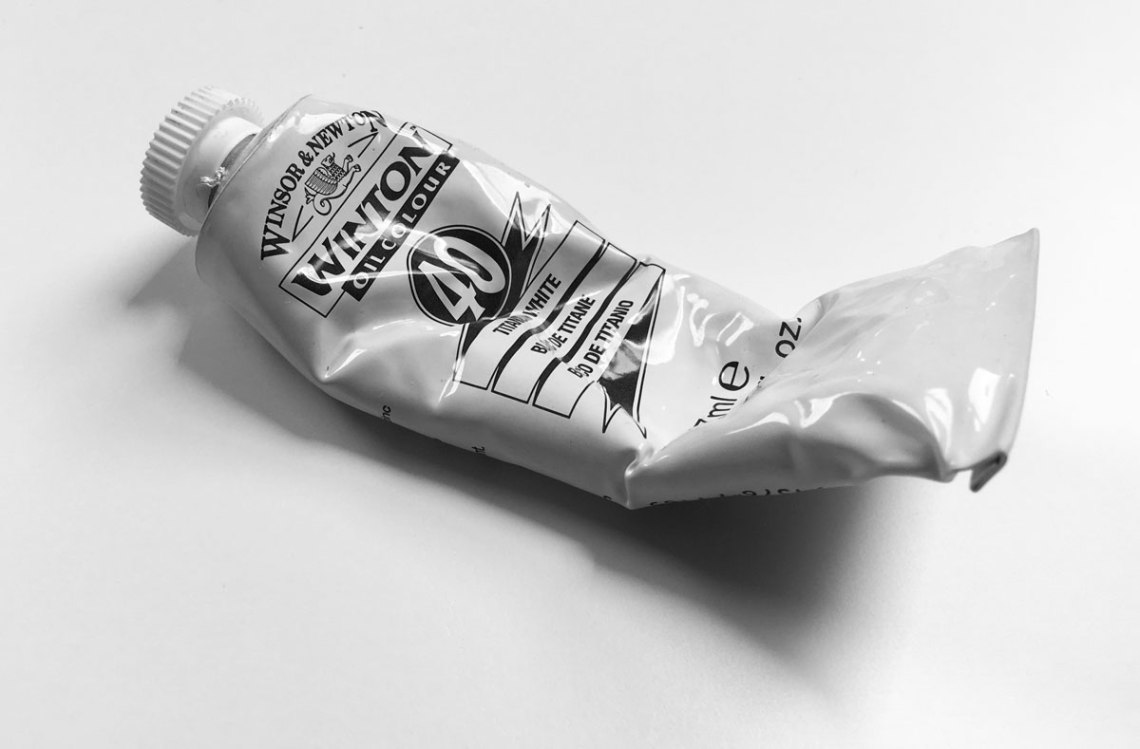 But I dutifully grabbed my drawing board, my drawing paper, and a nearby 2B pencil. I did what I could… and fifteen minutes later I had proved my point. I couldn’t do it. I had a horrible drawing that bore little if any resemblance to this reference photo. No, I can’t show it to you because I followed the instructions and put it away. I can’t look at it again until after I’ve finished this drawing course.

I grumbled under my breath, feeling ashamed and embarrassed. Why was I even trying?

That’s when I saw the real truth. I wasn’t trying. Although I’d been given as much as an hour to complete the drawing for that day, I’d half-heartedly scribbled through it in a quarter of that time, and then complained about how awful it was. Of course it was awful.

We often hear that the important thing — in art or any other endeavor — is that we try our best. And in so many ways, that’s what I thought I was doing. That’s what I told myself I was doing. But I really wasn’t trying my best at all.

Why not? I had to explore that question at length. What I learned was that I rushed through the drawing because I felt it was a waste of time, because I believed that even had I worked on the drawing for a full hour — or more — I would still have come away with a bad drawing. And I would have felt even worse. It’s one thing, you see, to put in a half-hearted effort and get a half-hearted result. It’s another thing altogether to truly try your best and not get good results. It’s disheartening. It’s frustrating.

I’d had a similar experience with a drawing I’d done recently. 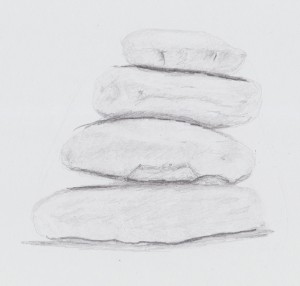 In my quest to find peace of mind with drawing, I sat down a few days ago to draw a little stack of Zen stones. I don’t know if that’s what they’re really called, but that’s the name I give them.

Before beginning, I put on some gentle music, and I spent time looking at my reference photo. I relaxed, I made my drawing time into a meditation, and I spent more than an hour completing this little drawing.

I thought about lights and shadows. I observed places where there were tiny veins in the rocks. I did my best to re-create all that I saw, and when I finally put down my pencils and took a good look at the drawing, I was disappointed.

It’s an all right drawing. You can look at it and tell what it’s supposed to be, I think. It shows that I put some time and thought into it…and yet, it’s not the beautiful, serene, peaceful-feeling work of art I wanted to create. It fell so far short of my hopes — my expectations — that I can’t appreciate what I accomplished.

So, again, I felt myself giving up. What’s wrong with my drawing? I kept asking myself that question, and all the while I knew the answer. It is about attitude, it is about mindset, and it is about expectation. I just had no idea how to get myself to a point of having reasonable expectations, a point where I was not continually being disappointed in the drawings I created.

And then I stumbled across this:

It was the last thought that hit me with a truly blinding flash of insight.

And when you first began, you were desperate to be where you are now.

Oh, my goodness, yes! Suddenly my tears of despair turned to tears of joy. When I first said “I have to learn to draw,” I would have given anything to have drawn something like those Zen stones. It would have been a miracle! Four years ago I would have been jumping up and down with joy if I’d had the ability to create that drawing. I wouldn’t have been tucking it away and feeling disappointed. I would have been waving it around for everybody to see, shouting, “Look! Look at what I did!”

Yes, four years ago, I was desperate to be where I am right now, and if I quit now, I’ll be right back there again. Why would I want to do that?

I’m not giving up.