Yes, my new dip pens and nibs arrived. Yes, I got out my ink. Yes, I’ve been practicing.

No, I didn’t do very well, so I’m chalking my first dip pen drawing up to a learning experience. Make no mistake about it, I did learn a lot.

My husband and I enjoy watching Forged in Fire, a reality TV show about knife-making. That show has nothing to do with pen-and-ink drawing other than the fact that occasionally a bladesmith is sent away from the forge because his blade has suffered a “catastrophic failure” and can no longer be tested or used.

It wouldn’t be a bad pen-and-ink drawing were it not for the places where I inadvertently got far too much ink on the page. In some places, it’s just splotchy. On the little tree at the lower left, I got so much ink that it actually soaked through and stuck the paper to the next sheet. When I tried to separate the pages, I realized they were about to tear, so, oh, well, I’ll just have two sheets of drawing paper joined forever.

Let me tell you a bit about this drawing. It started off as Day 1 of my Sketchtember drawing project — a drawing a day for each day of September. Originally I’d planned to follow a little prompt list I had, but I changed my mind. As a woman, that’s my prerogative, you know. I wanted to do more than simple little sketches. I wanted to practice graphite landscapes. I wanted to work on shading techniques.

So, I used this reference photo of a lovely Scots Pine tree: 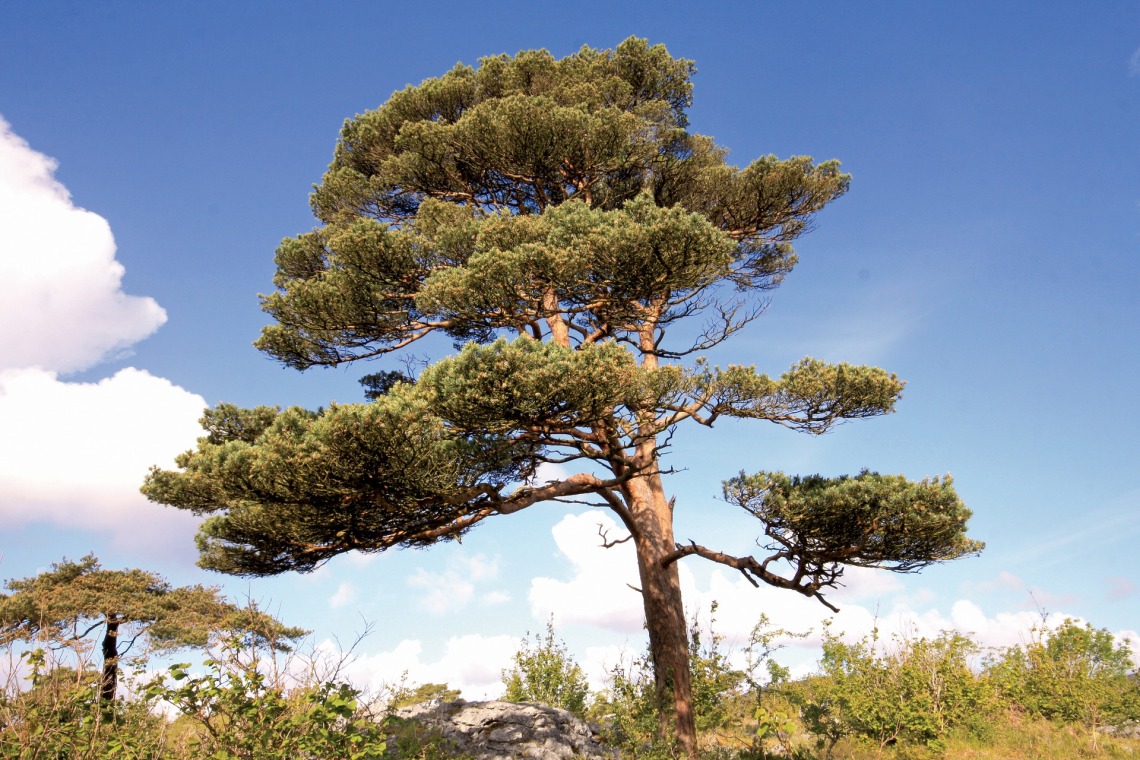 I wanted to try shading in the sky, and I knew it would be fun to try creating the textures of the pine needles. Another thing I liked about this reference photo is that it’s fairly easy for me to see the shapes within this tree. That’s something I’ve had problems with in the past. I’ve been working lately with the idea of finding shapes in the things we draw. This photo seemed like an excellent place to begin.

The graphite drawing took a considerable amount of time. Trying to blend the shading in the sky was a challenge, and while it didn’t turn out quite like I wanted, I did get the idea of a sky with clouds, and I got a lot of good shading and blending practice. I was quite pleased, too, with the original graphite-only tree, especially that branch on the lower right. I worked meticulously, creating a texture that truly looked like pine needles. I also made note of the lights on the tree trunk and tried to re-create that in the drawing.

All was going well… until I got that not-so-bright idea of using the drawing to practice with my new dip pens. In hindsight, I can see now that I shouldn’t have attempted it. But it seemed like a good idea at the time.

All those thin, fine branches! All those luscious pine needles! All those opportunities for hatching and cross-hatching!

My dip pens and ink were close at hand, so I grabbed them and gave it a go. I wasn’t going to touch the graphite sky, of course, but I definitely wanted to ink in the trees. And it started off really well as I inked in a few thin branches. So far, so good! But that was when I had to dip my pen in the ink for a second time. And that’s when I found myself getting too much ink — I did have a practice scrap of paper for testing but it didn’t help a lot — and before long I was regretting my decision to try inking-in this drawing.

But, as I said, I learned a lot. I thought back to those pen-and-ink drawing lessons I’ve had about hatching and cross-hatching. I thought about shading in ink by drawing lines closer together for darker areas. I remembered learning to create different textures with ink.

My biggest struggle, obviously, was getting the right amount of ink in the nib. And I only used a single nib for this practice session. I felt that I was making enough of a mess with that one.  No reason to get out any others and make a bigger mess.

At this point, I definitely like my Pitt Artist pens much better than this new Speedball Sketching Set. Maybe with more practice, my opinions will change. Today, though, I’m not so eager to try the dip pens again.

Any advice from those of you who have used dip pens for drawing?