I’m counting this sorry-looking — and very blemished pear — as one of my cringe-worthy failures. It was an exercise in stippling that didn’t turn out too well.

Stippling is, of course, a technique whereby shading is accomplished by use of lots of little dots. Up close, a drawing might look like just a lot of dots, but as you step away, you’ll see various shades. Don’t try it with this particular drawing, though. You won’t see anything but a big mess. 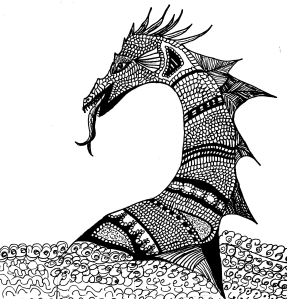 To say that I don’t like stippling would be an understatement. I use it only when I must, which is, to say, when I’m studying an art lesson that involves the technique.

Now, there are times when I play around with dots, but those dots are more decorative than anything else, just a way of having a little purposeless fun. I often do dotting, as I call it, when I’m making silly little monsters.

On my Inktober Sea Dragon (2017) I used a little dotting here and there.

But dotting and stippling are two different things. And, by the way, stippling is not the same thing as pointillism, although the two techniques are similar and are often confused.

Stippling involves making lots of dots. They are supposed to be evenly spaced — according to all the instructions I’ve read — but for the life of me, I don’t really understand how to make that happen. OK, so maybe I’m being a little melodramatic here. Even so, while I understand the concept behind stippling, I’ve never yet gotten a good grasp on how to do it properly.

Stippling is time-intensive, to say the least. At least, if you’re doing it right. The technique involves using only the tip of the pen, holding it straight up and down, touching the tip to the paper to form a dot — never a slash, a dash, or a drippy-looking dot — and remembering to (a) always keep the base of your hand resting firmly on the paper — but not in a spot with wet ink — and (b) take frequent breaks to rest your hand because — if you’re doing it right — you’re going to get tired.

One of the best tutorials for stippling that I’ve found uses this exercise template:

Unfortunately I didn’t come across this helpful video until after my morning drawing practice, and having stippled my way to a rotten pear, I’m in no mood to pick up a pen and do any more stippling.

The pear was, obviously (or maybe not so obviously) a similar exercise for stippling. This exercise is from Drawing Dimensions: Shading Techniques, and here is the template shown in the book: 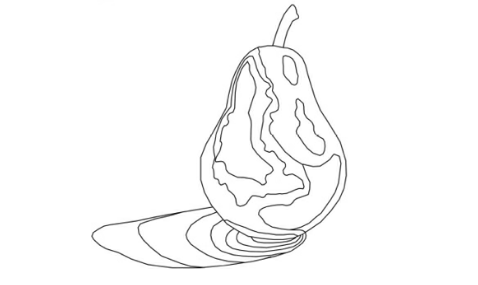 As instructed, I drew the pear and the shading template in light pencil, and then did my best to complete it.

My first mistake was making the template too small to really be useful. But who could blame me? I didn’t want to sit at the table for hours doing a stippled drawing of a pear. Like I said, this isn’t a technique I ever want to use for anything. So, I made a small little template.

Of course, the bigger mistake was attempting to do this with my new dip pens! Yes, I know how ridiculous that was. Truthfully, had I made a larger template and used one of my bold pens or a Sharpie, I could have come away with a stippled pear that actually looked like a pear. But I’ve promised myself I’ll practice with those dip pens every day until the day comes when I can actually use them.

As you can see, today was not that day. I’m starting to think that the day I learn to use dip pens is never going to come, and I should probably just pack them up and put them away.

In other words, don’t expect to see any dip pen drawings next month, and for that matter, don’t expect to see much — if any — stippling. You might see a few dots here and there if I just happen to be in a dotty mood, but they’ll be made with a Pitt Artist pen or a nice, thick Sharpie.

For what it’s worth, no, I’m not giving up on my dip pens. Between now and Inktober, I’ll continue practicing with them, and I’ll keep working on inking techniques. Who knows! Maybe I’ll surprise myself, but don’t count on it.