How Did I Get Here?

Today’s drawing comes straight from the orange groves of California, but I really have no idea how I got here. 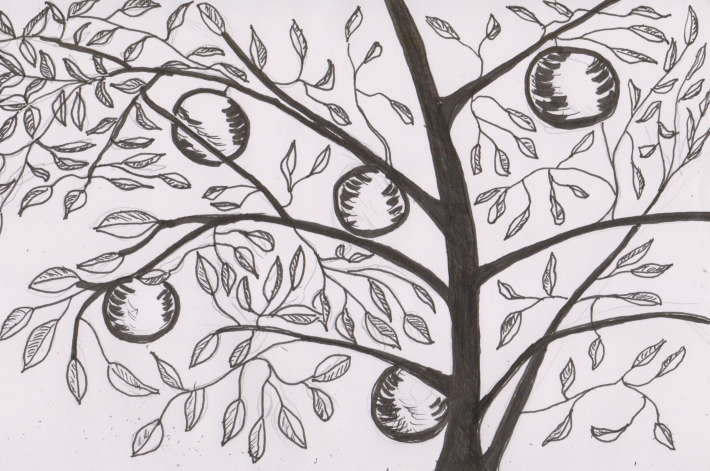 Oranges on the Tree – Ink Drawing by Judith Kraus

I wish now I’d copied the URL of whatever site my monkey mind and I ended up on for each of our silly searches. I did make a note that the orange tree we chose from today’s prompt words — lost, shy, exhausted, enchanted, tree — had something to do with William Cullen Bryant. So, this morning I browsed around a bit and found the specific reference. It’s a line from a poem with the unhappy title of The Child’s Funeral:

Currents of fragrance, from the orange tree,
And swards of violets, breathing to and fro,
Mingle, and wandering out upon the sea,
Refresh the idle boatsman where they blow.

I’m still unsure how the prompt words led to the poem, and in a similar way I’m quite unsure how I arrived at this place. Each time I sit down at the table and start drawing, I’m amazed all over again by what I’m doing. When I said “I’m going to learn to draw” and picked up a pencil one day in June, 2015, I would never have imagined that I would still be at it four years later. I really thought I would become discouraged and give it up after only a week or two — at most.

Of course I’ve had many moments of discouragement, but thankfully they came later in my art studies. At the beginning I was so surprised by the successes I saw that I eagerly kept going. It was exciting to see the progress I was making.

In recent weeks, I’ve once again begun seeing progress, and it is exciting. I still have so much to learn, but I am developing more confidence in my drawing abilities. I’m actually pleased with the ink drawings I’ve done so far for Inktober.

Today’s drawing of oranges hanging on the tree began as each Inktober drawing has: with a simple graphite drawing. I drew the main branches of the trees, started adding in smaller branches, and I worked on the leaves. I drew in the oranges, too.

I didn’t complete that initial drawing though. I realized it would be challenging to ink over all those leaves — there was no illusion to these leaves, you see. I needed to draw each leaf. Of course my actual reference photo had far more leaves, and a lot more oranges, too, for that matter. But there’s a part of my brain that is beginning to think and see as an artist. I was visualizing what I wanted to create. I knew what I wanted to do.

Like yesterday’s drawing of the coconut palm frond, today’s drawing was intended to be a somewhat stylized image. I guess the entire drawing itself might be called an illusion; I wasn’t really drawing an orange tree laden with fruit, but only making a drawing that suggested the tree and the oranges.

I inked the drawing — and completed all the leaves — with an “F” pen from my Pitt Artist set, but I felt it needed something more. I wanted more contrast. So, I took out that “B” pen from the set, and used it for the main branches of the tree. As a final decision, I also re-inked the oranges with the “B” pen.

Making this drawing was fun. I like that I’m in a place now where I can imagine a drawing in my head, a place where I can consider what I want to create, and how to go about doing it.

How I ever got to this place, I’ll never really know. But I’m glad I’m here.

What will it be?