There is a road my husband and I often drive down, and each year in the spring, we admire the beautiful pear trees bursting with blooms. Seeing those trees always makes me marvel at the beauty of Mother Nature.

I had that same feeling when I went searching for reference photos for today’s tree — the Bradford Pear. “Is there anything so beautiful as a pear tree in bloom?” I thought to myself as I scrolled through dozens of lovely images.

Of course I chose to draw those beautiful blossoms, and even though this isn’t my favorite drawing for the month, and it’s not my best drawing of the month, I’m pleased with it.

It many ways, this drawing of Bradford Pear Tree blooms is similar to the earlier drawing of the blooms on the Royal Empress Tree. I like this one a little better, though, because I think — or at least I’d like to think — that I’ve learned a little between then and now. This drawing shows a bit of improvement. Or maybe not. Maybe it’s just my imagination.

I did learn a lot though from doing this drawing. It led me to finding a lot of interesting but disturbing facts about the Bradford Pear. Let’s start with today’s prompt words: escape, filthy, bottle, misfit, tree. Rather ugly-sounding words, aren’t they! So how did they bring me to such a beautiful tree?

Well, beauty can be deceptive. It can even be dangerous.

Like the Royal Empress, the Bradford Pear has a bad reputation and is also considered an invasive nuisance. I found this bold admonition:

Go cut down any Bradford Pear Trees you have right now and never plant another one!

These aren’t my words. They come from Wellness Mama.  Bradford Pear Trees are beautiful, but they’re also an environmental disaster. And, did you know that the Bradford Pear doesn’t produce fruit? I never knew that.

Let me share just a few other eye-opening articles I found about Bradford Pear trees:

The Curse of the Bradford Pear

Why Bradford Pears are the Worst Tree Ever

Why You Shouldn’t Plant a Bradford Pear Tree

If you don’t have time to read these articles, that’s all right. I’ll list a few of the reasons why you probably don’t want one of these trees around.

Did you know any of this? I didn’t, and I’ll never look at those lovely white blossoms quite the same way again.

The initial drawing was done in graphite. I then used a Pitt Artist pen with a thick tip — much like a small marker — to create most of the tree branches. I decided to use the same pen to darken the centers of the blossoms.

Next I took a pen with a much finer point, inked in the leaves, and created the suggestion of the tiny veins on the petals. I also noticed a few straggly branches I’d missed inking in the first time around. I finished those with the fine tip, too.

At that point, the drawing was all right. But that’s all. Something was missing. My first idea was to draw in a horizon line and do a bit of shading, something that would ground this tree. One of my objectives for this Inktober challenge is to move toward more complete drawings, not just isolated objects floating across a white page. I tried finishing it with a bit of graphite grass. I still wasn’t happy. 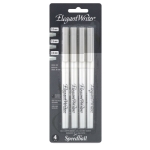 That’s when I reached for the newest addition to my Inktober supplies — a Speedball Elegant Writer pen. It just arrived yesterday and was sitting there within my reach. Recently I’d had a chance to try one of these calligraphy pens while at an art club meeting. These pens have water-soluble ink which means that you can create some very interesting effects with them. Too bad I can’t create those same interesting effects and get the beautiful results I’ve seen other artists achieve!

I used the pen to make a few little scribbles, then created a watercolor-like effect for the ground. But what about the sky? I added more scribbles, even scribbled a little in-between branches, then finished it off with the watercolor brush.

In the end, there’s no discernible difference between the earth and the sky, but I don’t care. I won’t say that the water-soluble ink made the drawing any better, but it did make it more interesting, and maybe that’s the same thing, really. At least there’s a slight suggestion of something more there, something beyond the branches and the blossoms.

Another interesting aspect of the drawing for me was combining illusion with a semblance of reality. What do I mean? Most of the drawing shows the blooms up close, close enough that the petals are distinct. That’s the semblance of reality I’m referring to. But all those other blooms back in the distance? I was a bit unsure at first about how to approach them. Should I continue drawing each and every petal? Could I just use a few carefully-considered scribbles to create the illusion of more blooms? At what point in the drawing should the reality end and the illusion begin? I played around with making the closest blooms distinct, the middle-distance blooms are a mixture of distinct petals and scribbles, and the most distant blooms are primarily little circular scribbles.

So, again, it’s not my favorite Inktober drawing, and I don’t consider it my best Inktober drawing. But it gave me a chance to learn — about art and about Bradford Pear trees — and a chance to be creative. That’s reason enough for me to like this drawing. I hope you like it, too.

Thanks for “hanging out” with Cheeky Monkey Mind and me today. Check back tomorrow to see where our next search takes us: