When Cheeky Monkey Mind suggested yesterday that today’s drawing should have twelve — yes, count ’em, twelve — trees, I shook my head. No way, Cheeky. I have enough to think about when drawing only one tree, so don’t even think about more.

Except that one of the drawing exercises I’ve been working on lately involves drawing groups of trees. Three trees in one illustration. Five in another. Seven in yet another exercise.

OK, fine, so I did — once — manage to draw seven trees at varying distances in the forest. Seven is a long way from twelve, and no, I wasn’t even going to try.

Now, as usual, I’m getting a bit ahead of myself here. Before I go on, I should mention today’s prompt words — one dozen, blind, chop, dizzy, tree — and explain that those words somehow led to tea tree. Trying to get more information about — and find images of — the tea tree led to melaleuca and lots of places wanting to sell me tea tree oil. A little more searching led me to tea tree plants, and I was beginning to wonder if there was really any such thing as a tea tree? And then, as I browsed more, I came across this photo of a melaleuca grove in Florida. 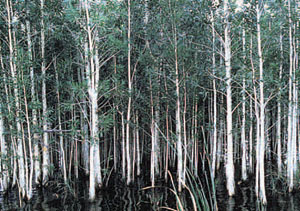 Cheeky Monkey Mind smirked. I rolled my eyes, and said “All right, Cheeky. I know when I’m licked.”

Now, my drawing bears little resemblance to the melaleuca trees in this grove. But my drawing does have twelve — yes, count ’em, twelve — trees. And that was the point of it. Now, it can’t be said with any certainty that my trees are actually tea trees. They are tea trees only because I say they are. And you know what? I had fun with this drawing. Like Cheeky Monkey Mind, it’s playful, it’s silly, and it’s all right to have fun with art.

Because the idea was just for fun, I approached the drawing in the same way. I used a pencil to lightly mark several horizontal lines, then drew in the trees, trying to create a pleasing arrangement. I inked the trees, added a slight bit of shadow on the right side of each trunk, and from that point on, I just did whatever I felt like doing.

I created a grassy slope in the background. I added patches of grass. I put in a few little bushes and maybe those are flowers there by one tree. Who knows!

I considered adding a few limbs and leaves, but I liked my twelve trees just the way they were. So I used a bit of graphite to create a sky behind them and I called it done.

And done it stayed. No going back and fussing with it. No tweaking those trees. Just smiling a little and adding it to my Inktober collection. 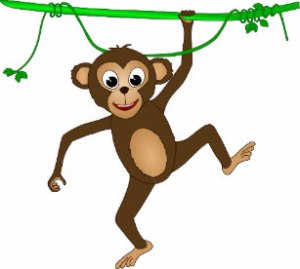 COME BACK TOMORROW, PLEASE, AND SEE WHAT CHEEKY AND I FOUND FOR THESE PROMPT WORDS:

UNTIL THEN… we’ll be just hanging out and  having fun.