When It All Goes Wrong

Brace yourselves. Now that I’ve adopted the rule of never wiping away a work in progress, you’ll be seeing a lot of bad paintings, like this one:

This one doesn’t even have a name.

You’ll recognize it, of course, as yet another of my woodland scenes, and I feel sorry for any woodland creatures who happen to live here. It’s not a pretty place.

Like most of my paintings, though, it started off looking quite nice. I was very happy with the sky — a gentle blend of lavender, gray, and white. In looking at it now, I wish I’d added more white to the center to create an even lighter effect. Oh, well. Live and learn, and on my next painting I’ll try to add more light.

From that point on, everything went wrong with this painting, and in a way, I was actually glad. I’m discovering that it’s sometimes very beneficial to ruin a painting while I’m working on it, lest any part of it becomes too precious. For me, that’s always a problem because once I have those precious places where a particular part of a painting looks almost breath-takingly beautiful (that does happen once in a while) I tend to freeze up. I become afraid of the painting, hesitant to put another brush stroke on the canvas for fear of spoiling it all.

With a painting that’s already going bad, there’s no such hesitancy. I’m free to do whatever I want, and it doesn’t matter how awful it looks because it’s already looking awful.

So it was with this painting. I wanted dark trees against my pale skies, but I simply could not get the leaves dark enough. Of course, that’s because my skies were still wet. Had I waited until those first layers of paint were dry, maybe it would have worked. In my mind I saw almost a silhouette effect with dark, leafy trees standing out against the sky, but it just didn’t happen.

I started playing around, adding different colors to the leafy canopies, and in the process one tree (which is no longer visible) became horribly overgrown. No problem. I would just paint over it, I decided, since I need practice on placing objects in the foreground.

I played with colors. I put in a path — which has also mostly disappeared now — and I painted in bushes here and there. I tried creating a bit of land, turned it into rocks, tried to add water, and ended up with a horrible mud puddle. I added a few twigs and sticks, and then drew in the trunk of a tree with limbs going everywhere. Yes, it covered up the awful tree in the background, but it turned out to look just as bad.

As you can see, I ended up with an ugly painting. But what’s really so bad about it? I was actually glad to see that the composition itself isn’t too bad, and for once, I do have a slightly broader range of values than usual. Take a look at the same painting in black-and-white. 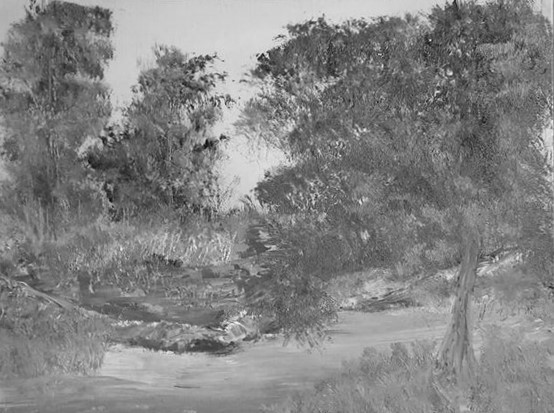 It’s not so bad in black and white.

I’m pleased to see that my sky is definitely the lightest value in the painting. I could still use more darks in the trees — especially the trunk of the closest tree — but at least I do have a little variation. I’m going to take that as a sign of progress.

And it feels good to see that even a ruined painting in some respects is probably better than some of the successful paintings I’ve done in the past. I am learning, and I am growing as an artist.

As we all know, we can learn a lot from our failures, so, yes, you can expect to see a lot of really awful paintings in the future because I intend to learn as much as I can.

And the music I hear for this painting? When It All Goes Wrong by Chase and Status. Enjoy!