I love coincidences, especially ones that involve things I’m learning about. When my attention is called to one thing from various different sources, I take note, always thinking that there must be some significance there, some reason why the cosmos wants me to look, to see, to explore.

So it was that I sat up and took notice when the following painting recently came to my attention several different times last week. It is a self-portrait of Dutch artist Judith Leyster, painted around 1630.

I was first introduced to this work through a lecture by William Kloss regarding the paintings of the Dutch Masters. Only moments later, after the lecture ended and I picked up an old issue of Artist magazine, I did a double-take when I opened it and found this same painting staring out at me from the pages. And a day or two later as I browsed around for a bit more information about the Golden Age of Dutch painting and the importance of the guild, I stumbled across an interesting article about, yes, Judith Leyster and her art. Featured was, once again, her self-portrait.

Who was Judith Leyster? Obviously she was quite a talented artist, but I’d never heard of her before. Of course, that doesn’t mean a lot. Yet, the sad truth is that for a very long time, practically nobody had heard of Judith Leyster.

One thing that is always pointed out about this self-portrait — and what immediately jumped out at me — is the fact that she’s a bit too dressed up for painting. I really laughed to myself a bit at her attire, thinking at once of how very messy I am when I’m painting. Would I dare wear a good dress with frilly lace trim while painting? No, of course not, and I didn’t need William Kloss or anyone else pointing out to me that she surely would not have actually dressed this way in her studio. Still, it strikes me as a bit amusing that everyone who discusses this self-portrait feels compelled to remark on her dress.

A good discussion about the painting can be found here:

While this talk is informative, there is far more to the story of Judith Leyster and her painting.

Let’s start with the question of why so few people are familiar with her work. I’m not sure we can cite any definitive answers — art, fame, and recognition are always ephemeral — but we might guess that her work was likely forgotten because she was a woman. Unlike many of her male counterparts, we know little about her training. It’s believed that she began painting to help her bankrupt father with expenses, and it’s thought that she might have studied with Frans Pietersz de Grebber.  That, however, is only speculation. 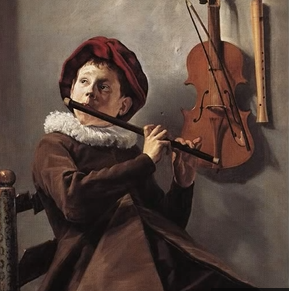 She was obviously a very talented artist, and she painted popular genre paintings, the sort of works that were in demand by the rising merchant class.

Leyster was certainly recognized by her peers as a successful artist, and she may have been the first woman admitted to the Guild of Saint Luke,  If you follow that link you’ll come to a Wikipedia article that features — yes, again — Judith Leyster’s self-portrait. That entry, however, states unequivocally that she was the second woman admitted to the guild, and that her admittance came in 1633.

Many art scholars think that the self-portrait she painted in 1630 (at the age of 20) was most likely a presentation for the guild to show her abilities. Be that as it may, and despite Wikipedia’s assertion that she was the second female in the guild, there is still debate over who was the first.

What’s even more distressing, however, is the realization that many women were admitted to the guild and some of them may have been accomplished painters like Judith Leyster. From the records that survive, however, it’s impossible to say with certainty because the “artistic specialties” of female guild members was not always listed. Work produced by other women guild members included embroidery and pottery, and some female artists were simply listed as widows who carried on the work their husbands had done, although this is also questionable since one rule of the guild stated that only married men could operate workshops. 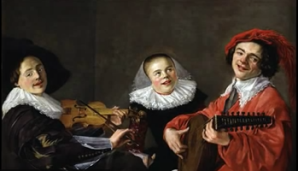 Leyster married a fellow artist — Jan Miense Molenaer — in 1636, and according to lecturer William Kloss, she gave up painting in favor of being a wife and then a mother. He feels she did this willingly, as a matter of practicality and not because it was expected of her.

After further reading, though, I’m not altogether sure that she did give up painting. I’ve come across references to her sharing a studio with her husband. As we’ve now learned more about Leyster and her work, there are art historians who believe that many of her paintings were possibly attributed to her husband. Some of her paintings were also attributed to Frans Hals, and it’s also been thought that both she and her husband might have studied with Hals. We simply don’t know.

What we do know, however, is that much of her work was wrongly attributed to other artists, including this one, titled The Carousing Couple:

Now, here’s where the story gets very interesting. I turn now to Dominic Smith and his writing:

In 1892, a painting that had been attributed to Frans Hals for more than a century became the subject of a dispute between two English art dealers. The 1630 painting, known at various times in English as The Happy Couple or Carousing Couple, was typical Hals and Dutch Golden Age territory—a genre scene of a couple making merry in a tavern. Pink-cheeked, bemused, the woman raises a glass while her male companion sings and plays the violin. When the painting changed hands for forty-five hundred pounds, the buyer sued after discovering a signature other than Frans Hals right below the violinist’s shoe. It was a monogram nobody seemed to recognize: a conjoined J and L, struck through with a five-pointed star.

— Dominic Smith —  Daughters of the Guild

Here is that little monogram:

As a result of the court case’s publicity—the media has always loved it when art experts get it wrong—a Dutch collector and art historian, Cornelis Hofstede de Groot, recognized the monogram as belonging to Judith Leyster, one of the first women painters to be admitted to a Guild of Saint Luke in the Netherlands during the seventeenth century. Though she’d been praised by the observers and historians of her era, Leyster had essentially been erased from art history since her death in 1660. In 1648, when Leyster was not yet forty, the Dutch commentator Theodore Schrevel had noted, “There also have been many experienced women in the field of painting who are still renowned in our time, and who could compete with men. Among them, one excels exceptionally, Judith Leyster, called ‘the true Leading star in art.’ ” Since leyster means “lodestar” in Dutch, Schrevel enjoyed a pun to underscore his point.

– Dominic Smith –  Daughters of the Guild

Sadly, this was not the only painting that was either unattributed or misattributed. In 1893 de Groot published a scholarly article about Leyster, and soon thereafter six more paintings with her distinctive signature surfaced.

Fortunately today we know at least a little about Judith Leyster and her art, and although I laughed a bit at the image of her seated before her easel, dressed in her finery as she worked in oils, I’m glad now that she painted herself in this way. I almost get the feeling she knew she might be forgotten, but maybe she knew, too, that some day she would be rediscovered — and appreciated — all over again. She comes to us now, dressed for the occasion.

May 2022: JUST A QUICK NOTE… I noticed this bit of art news and felt I should add it here.