As we celebrate Valentine’s Day today, I thought it would be fun to look at love and romance in the world of art. There have been many famous couples who’ve shared not only a passion for art, but also for each other. Some have lived happily ever after, others… well, not so much.

Certainly one of the best known couples is Frida Kahlo and Diego Rivera. Their relationship began when she was one of Rivera’s students. In 1929 they married, but in 1939 they divorced due to infidelity and violence. A year later, they remarried.

Kahlo and Rivera influenced each other’s colorful styles. Known as Mexico’s greatest living artist because of his socially-conscious murals, Rivera believed that his wife’s more personal aesthetic in art was superior to his. He called her death “the most tragic moment” of his life. 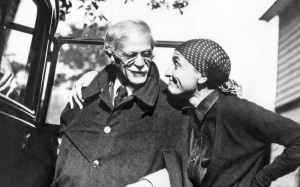 A truly loving union was that between artist Georgia O’Keefe and photographer Alfred Stieglitz. She was a young art teacher in Texas when they met. Stieglitz was in his fifties and was already a successful photographer. He was also an art dealer, and he exhibited abstract drawings she’d made.

They married in 1924 and lived in New York for the next five years. Beginning in 1929, she began spending part of each year in New Mexico as the direction of her work changed. Over the next 15 years, they wrote thousands of letters to one another.

After her husband’s death in 1946, O’Keefe moved permanently to New Mexico. She lived another forty years.

The love story of Jackson Pollock and Lee Krasner seemed promising at first, but ultimately ended in tragedy. Their first meeting was in 1942 when both had works exhibited at the same gallery, and three years later they married. Krasner and Pollock — though both abstract expressionists — had markedly different styles. His style influenced his wife’s art by giving her a greater sense of creative freedom, while Pollack felt that he benefited from Krasner’s formal training.

Sadly, his drinking and an affair put their marriage on rocky ground. In 1956, she left the states for a European visit. While she was away, Pollock was killed in a car crash.

Some creative couples have worked together yet maintained their individuality as artists. Others have collaborated, not always with the happiest of endings.

Photographer Lucia Maholy collaborated with her husband Laszlo Maholy-Nagy from 1921 to 1929. In the famous 1938 Bauhaus exhibition at the Museum of Modern Art, fifty of their joint photographs were displayed. Her name, however, was never mentioned. She spent over 20 years pursuing legal action to gain ownership of those images, yet was recognized for only a few.

Other creative couples include Max Ernst and Dorothea Tanning,  Willem and Elaine de Kooning, and Pablo Picasso and Françoise Gilot.

These relationships were often — like the artists themselves — colorful, emotional, constructive at times, destructive at other times. Like the rest of us, these couples struggled to have and to hold, for better or worse, for richer and poorer, in sickness and in health.

It’s sad that so many of these marriages ended badly. Despite the unhappiness, anger, and sorrows that bad relationships can bring, I choose to believe that love still existed for these couples, and that love led them and inspired them to create the works of art we cherish today.

Maybe that makes me a hopeless romantic. So be it.

I hope today brings love, happiness, roses, chocolates, and whatever else your heart desires.