I’m sitting here in my new little art studio — or actually, I’m sitting here at my computer desk, a short distance away from my studio area. It’s a good place to sit and get a bit of perspective on my art work.

We hear so often about the need to step back from our painting . In fact, one of the first things I learned from my experiences in oil painting was that it’s really impossible to see what a painting looks likes from up close. Stepping back certainly does help us get a better look at — quite literally — the big picture. 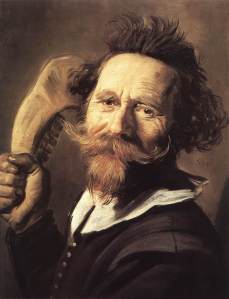 And so it is that this morning I’m sitting here being rather ingloriously stared at by an odd-looking fellow whose face is taking shape on my easel. Although he’s based somewhat on Verdonck — a portrait by Dutch master Frans Hals — it’s not meant in any way to be a copy of the painting.

Actually, it may be slightly inaccurate to refer to this painting of Pieter Verdonck as a portrait.  It would perhaps be better described as a tronie, and until this morning, I was totally unfamiliar with that word.

Here is a short definition:

A tronie is a common type of work in Dutch Golden Age painting and Flemish Baroque painting. It shows an exaggerated facial expression or a stock character in costume. It is related to the French word “trogne” which is slang for “mug” or head.

The funny thing is I began creating my own tronie on canvas before I’d read a word about the painting and its style. I think it’s a tribute to Frans Hals, the artist, in that he could so perfectly execute this painting of his friend in a manner that would lead me — hundreds of years later — to immediately see it in exaggerated, almost comical terms. He most definitely created a character with this painting.

And that was what I set out to do. As a first step back into my studio after several long weeks of not painting, I wanted something a bit unstructured, something I could have fun with, and yet something I could learn from at the same time.

I printed out a copy of “Verdonck”, grabbed a canvas (one previously toned with a yellow ochre shade), picked up a pencil, and began drawing a face with big, bold strokes. What fascinated me most in the Hals painting is the play of light across the man’s face, so I called my canvas “A Study in Light and Dark” and that’s where I focused my attention.

I mixed a flesh tone using red and green, then added white to lighten it. In everything I did, I exaggerated my brushstrokes, lines and colors. I made quick notations on the placement of the eyes, tried to create the shape of the nose only through using light and shadow, and used lots of white on the lighter side of the face.

It is amazing, really, to understand how few brush strokes (or swipes of charcoal, if you prefer doing portraits that way) are actually required in order to capture a resemblance to the human face.

I’ve yet to get the nose just right, and later I’ll play more with lights and shadows, but for now, Pieter Verdonck can quietly repose on my easel. Doing this quick painting of him — at least a quick painting sketch — was great fun this morning.

Here’s a bit of history about the original painting.

Pieter Verdonck  was a man in Haarlem best known today for his portrait that was painted by Frans Hals in 1636.

Very little is known of him, though a Pieter Verdonck was recorded in the Reformed Church of Haarlem as coming from Ghent when he was engaged to be married in 1597 to Catharina Gelaynis of Vlissingen.

He was probably a friend of Hals, who painted him in the guise of Samson holding the jawbone. Perhaps his friend was not amused, because the painting was later painted over to reflect a man holding a wine glass and his wild hair was covered by a velvet beret.

According to the RKD the jawbone is from a cow. The jawbone was meant however to symbolize the jawbone of the ass that was used by Samson to slay 1,000 Philistines. The portrait has been identified “Verdonck” because of the engraving made by Jan van de Velde with a short poem describing the subject, which loosely translated, meant “This is Verdonck, the bold guest whose jawbone attacks everyone/ By not distinguishing between high or low born, he landed in the work house”. The poem could be seen as a moralistic warning to rederijkers whose satiric discourses went too far. Both Hals and his contemporary Salomon de Bray were rederijkers in Haarlem. De Bray made a pair of pendant pieces in a similar genre depicting David with his sword and Samson with his jawbone. De Bray’s version shows Samson a moment later in the story, when he prayed to God out of thirst and was rewarded with the “fountain of the crier”. Hals’ portrait shows the moment where Samson in triumph proclaims that “with the jawbone of an ass, he slayed 1,000 Philistines”.

The fact that Hals painted his subject in close up, cutting off the knuckles of his fist, leads one to conclude the painting was meant more as a tronie than as a portrait.

So, it’s been quite an educational morning here in my new little art studio, and later I’ll come back to Verdonck — my version of him — and go over all those lights and shadows again.

— More to come with this tronie tomorrow –