Wonder 1: A Round Corner Punch

Most of you craftier-than-I readers probably already know about this little gadget, but I didn’t have a clue that such a thing existed. As its name implies, it’s used for cutting corners to a lovely rounded shape. I found out about round corner punches when I was making bookmarks. This useful tool quickly and easily takes my bookmarks from just another handmade bookmark to the level of a beautiful hand-crafted gift.

Yes, I did know about white gouache, but I’d never used it before. And then I did my Evening Storm watercolor and needed some way to create the effect of waves crashing against the rocks. Would white gouache work? Wonders never cease to amaze me. It worked. 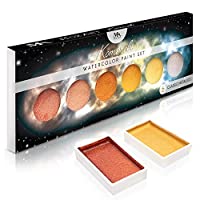 I’m not linking to any specific product here because the set I purchased — by Komorebi — is no longer available from Amazon.

I love this set! Until I started doing watercolor doodles and watching various tutorials, I had no idea that metallic watercolors were available. This set includes gold, silver, copper, and bronze colors. I’ve used them for several projects, and I adore them.

I’ve used masking fluid before, way back when I was first learning and attempted an urban landscape — complete with its own (unintentionally) leaning tower. I liked the idea of masking fluid, I understood its purpose, but messing with it was… well, messy. Now, however, I’ve found masking liquid available in a handy pen! Will wonders ever cease? Let’s hope not. I’ll admit it takes a bit of getting used to, but now that I’ve learned to handle it, I’m probably going to be using this gadget a lot.

If you’re going to use masking fluid, you’re going to need an adhesive pick-up eraser. I wish I’d known that earlier. I did a project — which you’ll see below — and I used masking fluid then tried to remove it by rubbing it with my fingers. That didn’t work too well. I used a regular eraser then, and that didn’t work too well, either. In the tutorial I was following, the instructor does specify an adhesive pick-up eraser as the proper tool for the job, so once I realized the importance of it, I ordered one from Amazon. It will be arriving soon.

Perhaps the greatest wonder of all, though, and one that certainly did amaze me, was the recent project I completed following a Scratchmade Journal tutorial.

Usually my attempts at following art tutorials look nothing like the painting being demonstrated, especially not on my first try. This one, however, turned out looking good!

Here, as always, the camera fails to capture the true colors and appearance of this “Winter Scene” watercolor, and you’ll notice that I was a bit careless with my tape. Even so, and even with my fledgling attempt at using that art masking fluid pen and my lack of an adhesive pick-up eraser, I still came out with a lovely painting, one that I’m happy to share.

With art, I’ve learned, there is an unending array of wonders waiting to be discovered, explored, and put to good use.

What new art discoveries have you made recently?