Last night was a fun night at Gettin’ Sketchy. It offered a chance to get out a few art supplies I haven’t used in a very long time — pan pastels and Faber-Castell’s Polychromos colored pencils. Here’s my creation for the timed-drawing session: 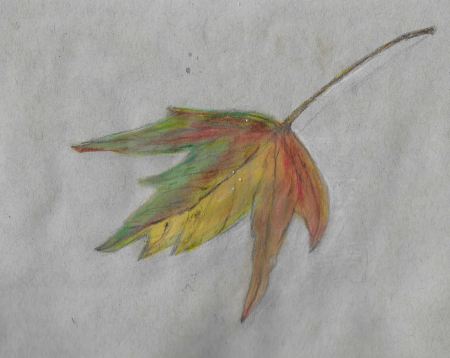 As you can see, it’s done on my Strathmore Gray Toned sketchbook paper. Once again I finished my drawing well in advance of the instructor. Where he struggled to complete his work in the allotted forty-five minutes, I was through with mine after about thirty minutes. I’m not nearly as accurate with details as he is, nor do I usually add a background. In his drawing, Matt — “The Virtual Instructor” — used a soft white pastel stick to lay down a beautiful background, and he then added gray for the cast shadow.

I have problems creating realistic-looking shadows, so I opted for a bluish-gray and added only a hint of shadow.

We began the project by making a simple outline drawing of the maple leaf — one that Matt had found in his yard yesterday morning. I did mine with graphite, getting a slight head start on him. He chose a brown colored pencil to draw his outline, so I switched over and re-outlined my drawing with brown.

When I bought them, I used them a few times, but never really developed any skill with them — or with any pastels. So, it was fun to bring them back out and play with them.

In case you’re not familiar with pan pastels, they’re applied with a special applicator which is included with the set. It looks a lot like a palette knife with a small sponge attached.

After applying the pastels, we switched over to colored pencils, going over the colors again and adding a few details. I did what I could, adding a few veins to the leaf as well as a few brown spots. I then went ahead and worked on adding that bit of blue-gray shadow.

I enjoyed the project, and I’m happy to say that more and more I feel that drawing is getting a little easier for me. I no longer struggle as much as I once did, and I don’t worry too much about my finished drawing. Even if it’s not a perfect re-creation of our reference, it certainly does look like a maple leaf dressed in autumn colors. That’s what the lesson was all about. I think I got that part right.

There will be two more episodes of Gettin’ Sketchy, so if you haven’t checked it out yet — it’s free — come and join the fun next Wednesday evening.