You’ve already seen this scene a couple times before, once when I used it for a high-key study, and once when I used it for a low-key study. It is a very simple scene. A gentle sky, distant hills or mountains (whatever you want them to be), a quiet lake surrounded by green grasses, bushes, and trees. There’s a bit of earth jutting out into the lake with a few additional evergreen trees there.

Yes, indeed, a very simple scene, one that I can quickly paint as a study in only a few minutes. And that’s exactly what I’ve been doing for several days now. It is part of a learning process, and I can actually see how the color theories I’m working with do produce different results.

So, take a look at these quick studies. Judge them not by any artistic merit. I’m merely slapping paint on very quickly, and at this point I’ve painted this scene so many times that I could probably paint it with my eyes closed.

Look not at the lines and shapes but at the colors. Do you sense any differences between these versions? A better question, perhaps would be “Do you feel any differences?” Take a look at these, and then I’ll discuss them individually. 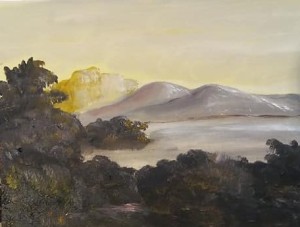 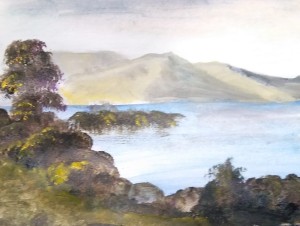 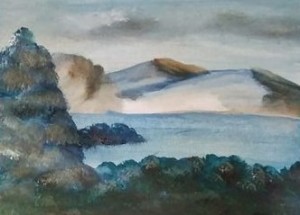 All right. Here’s what I did in this color/light temperature exercise.

The first painting in this series was done using all warm colors. In fact, I used only warm colors with warm pigments. What I mean is that with my yellow, I chose cadmium yellow light instead of lemon yellow. The point was to see how a painting looked with only one temperature used throughout.

Using only a single “color temperature” — which, as I’ve learned, is actually an incorrect definition since we’re really talking about “light temperature” — is not the best approach in painting.

Take another look now at the second painting in the series. This one, as you can probably guess was the “opposite” to the first, painted all with cool colors (and cool pigments).

To me, the second painting does have a little “chill” about it. Again, though, it’s “technically deficient” because it uses only the cool temperatures.

Moving on to the third painting, I’ll clue you in on something. You should dislike this version. I know I do, and this was where I really began to catch on to the principles of warm and cool temperatures. It was an attempt to create a 50-50 balance between warm and cool.

My approach was to divide the painting area in half. The background — sky and hills — was painted with cool colors. Everything else was done with warm colors. I know it’s difficult to really assess what’s happening because you’re seeing photographs and not the actual studies, but as soon as I painted this I hated it. I understood at once that the “50-50” idea is not how we should approach this aspect of painting.

What we need to do, according to the information I’ve been studying from various sources, is to choose a predominant temperature. I’m understanding this now primarily in conjunction with “light and shadow”.

In the fourth version of this quick study — which turned out to be my favorite — I used predominantly warm colors. Everything in the light is warm, including areas of highlight. The shadows, conversely, are done with cool colors/cool pigments.

To me, this painting seemed much more “alive”. It has a more “natural” feeling about it. Even the blue I used has a warm touch to it, and the warm yellow highlights in the grassy area give the painting a rather cheery mood, I think.

By the time I got to the fifth version, yeah, I was tired of painting the same scene. I wanted to finish the series — this time using cool lights and warm shadows — but I didn’t spend much time with it. I really wasn’t happy with the color choices I made, but at least I completed the project.

Definitely I could have taken more time and done better with the scene, but at that point I was more than ready to take what I had learned and move on.

I’d be interested in any comments you’d like to share about these different studies. For the record, these studies were all done on canvas paper. Some, in fact, were actually painted on the reverse side of earlier versions. Canvas paper is a great surface for quick studies and practices. If you use it, it helps to tape it to a board or panel. Even then, it’s not quite the same as painting on actual canvas or even on a canvas panel.

Since these were all “quick studies”, I did not do any prep work — no toning, no preliminary sketches, no careful value studies.

I’ve discovered — a bit surprisingly — that I tend to respond best to paintings that are predominantly warm in color/temperature. I’ve always been partial to cool colors. I say that blue is my “favorite” color. Yet in reality, as I learn more about landscape painting, I find myself being drawn more to the warmer side of the spectrum.

And now, I’m moving away from this scene. I’ve painted it a total of seven times — the five versions shown here, and those earlier “key studies”. I’m more than ready to move on to something new!