Every creative individual knows that there are good days and there are bad days. They tend to come and go in fairly predictable cycles, and I’ve learned to take heart from that. If I’m having a bad day in the art studio, I don’t worry too much about it. It means that a good day will be coming along soon.

Conversely, if I’m having a good day, I celebrate it as fully as I can, knowing that those bad days are lurking right around the next corner. While we might like to think of progress as consistent forward motion, that’s not really how it works.

Progress consists of moving forward and backing up. The familiar idiom speaks of taking “one step forward and two steps back”, which in the long run would not be progress at all. In actuality, it’s more like taking two or three steps forward, and then sliding back a step or two. Progress may seem slow, but there’s still forward motion

In browsing around a bit this morning, I’ve found some delightful quotes about the steps we take, how many, what direction, so let’s have a little fun here, all right?

I think we can all agree on the simple fact that one step forward and two steps back will not get us where we want to go. When I came across this image, I could definitely feel the pain. Truly, I’ve been there. I’ve felt those discouraging feelings.

How do we break the cycle?

As I was exploring this question I came across a little information about child development. While that might seem far afield from art and the development of our creative abilities, maybe it’s not so far-fetched if we think about it.

Young children go through a natural process of growth and development that includes two stages:

Both stages are necessary. To a parent, however, it seems that their child is backsliding, that behaviors are becoming more difficult to handle, and that things learned are being unlearned. According to child psychologists, these unequal phases tend to cycle back and forth approximately every six months until finally, around the age of 8, the child’s behavior settles into a more balanced, more stable state.

Is it really so different, I wondered, with art? I began learning to draw in June 2015. I moved forward quickly, it seemed, but sure enough, that rapid “growth spurt” led to a feeling of failure as my progress began to slow. I was no longer improving by leaps and bounds. Sometimes I saw no improvement at all. Sometimes I felt my drawing ability got gotten worse. Yep, backsliding.

But then after a time of patient study and re-focus on basic skills, I saw myself moving forward again. And this cycle has repeated — both with drawing and with painting — in a process comparable to the growth and development of a child. As far as art goes, I’m roughly the equivalent of a Kindergarten student, five years old, and still cyling back and forth between finding my way — equilibrium — and feeling completely lost — disequilibrium. I have hope now that as I mature, maybe my art behavior — my ability to feel confident and to improve — will settle into a more constructive state.

But taking one step forward and two steps back isn’t always how it goes, at least not according to popular memes online. How about if we just move one square ahead and then one back? We’re not losing ground, but we’re not getting anywhere, either. We can change our mindset up a bit though, add in some good music, and see our movement as a dance.

I love this definition of an optimist. It’s not a disaster; it’s a cha-cha, and who doesn’t love a god cha-cha?

The message here — to me — is that sometimes it’s all right to stay where we are, to move back and forth a bit, as we’re trying new things. It’s a dance. Make it fun. Enjoy it! 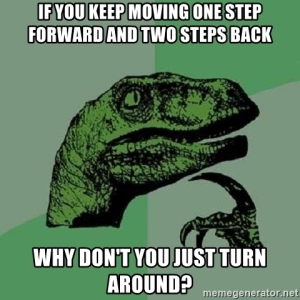 Easier said than done, I suppose, but it’s something to think about.

The important thing in all of this, of course, is understanding that forward progress is not a smooth, unbroken course.

We will take steps backward. The secret to success — one of them,. at least — is to keep stepping ahead, and even if the movement is slow, it’s still leading us forward. Other memes point out that sometimes stepping back is necessary — one step — so that we can spring forward with several giant steps.

Other memes speak of three steps forward, two steps back, but whatever the number (and are we really counting?) we are still ahead of where we used to be. For me, that’s the most significant thing in all of this.

I’m not where I used to be. I’m no longer someone who knows nothing about drawing or painting. I might not be a great artist, but I am an artist, and I will staunchly defend my right to call myself an artist. I’ve come a long way in five years.

It’s not an easy journey for me. This is something I hope each of you reading this understands. I’m not a natural artist. Whatever abilities I’ve developed have come as a result of study and practice. Sometimes drawing and painting begin to feel more natural to me, but still, it’s never easy.

I love those rare days when it starts to feel easy, but I know they won’t last. Especially as I “grow up” as an artist and begin learning new techniques, taking on more challenging subjects.  Yes, it’s going to be hard for me, and some days I will backslide.

But I intend to keep going, taking as many steps forward as I can, and not despairing too much about those occasional steps in the wrong direction. And if I do get stuck in one place, that’s all right too. I’ll just learn to cha-cha.