Recently I stumbled across a “question and answer” site online. Why stop signs are octagonal was the question posed. I didn’t know the answer, and so I read on. Stop signs are eight-sided because there is a belief that more complex shapes suggest greater importance. True? I don’t know.

It was a good starting point. From time to time, I still like to go “back to basics” and review those earliest “how to draw” lessons that focused on making lines, connecting them to create shapes, and then — as my lessons continued — learning how to turn simple shapes into forms, another very important element of art.

Now, with more than a few years of drawing and painting experience, I’m revisiting lines and shapes from a slightly different point of view, not merely as elements of art, but as symbolic elements that connect with our psyche at a deep level of awareness.

As I’ve studied composition and as I’ve read about fundamental principles in design, I’ve seen how various lines and shapes are used to add unity to a work of art, to draw attention to specific areas, or to create a sense of rhythm and movement. All of that’s important, but those simple lines and shapes can have a definite effect on our thoughts and feelings.

Here’s a bit of information I uncovered as I was browsing around.

A circle is infinite in that it has no beginning and no ending. We can use circles in art to symbolize feelings of completeness, perfection, and continuation. Circles often represent the cycles of nature, and are often seen as “playful” elements. Circles tend to make us feel comfortable and satisfied.

I’ve written a bit about squares before. While being called “a square” was considered derogatory in the 60’s, squares are actually symbolic of stability and security. They appear solid, giving us a sense of building on a strong foundation. Squares can also represent long-standing traditions and conservative values.

The triangle has always been one of my favorite shapes. It represents both balance and movement, and is often viewed as a symbol of transformation.

Sometimes lines don’t form shapes. They may cross over one another. Shapes can also “cross over” or overlap, as in this design of hearts. But whether it’s merely a few lines, circles, squares, or any other shape, the symbolic meaning is the same — connectedness. Intersecting lines denote a relationship between one thing and another.  I saw this principle for myself quite clearly in the abstract work I titled “Connections“.

A spiral is a line that’s almost a shape. It can go in a lot of different directions, and it symbolizes growth and evolution. It’s a bit like taking overlapping circles and spreading them out! So in that sense, you have cycles, connections, and growth happening all at once.

A star shape can be four-pointed, five-pointed, six-pointed or more. When we first learn to draw, it’s usually the five-pointed star we become most familiar with. When we do a job well, or when we’ve completed a task, we might earn a “gold star”, and thus the symbolism of a star is excellence. Of course, stars also have religious and spiritual connotations. They may represent sparks of enlightenment, divine guidance, and protection.

The arrow shape has one very useful purpose. It points us in a specific direction. Arrows are seen as forceful shapes. They don’t suggest; they direct our attention in a commanding sense. In landscape painting, we might not make definite arrow shapes to lead the viewer’s eye through a painting, but a few carefully-placed strokes can form a “natural” arrow shape.

When I was doing a lot of zen-doodling, I noticed that I tended to use far more curved lines than straight ones. These lines suggest movement and fluidity. Like intersecting lines, they can also represent connections. To me, curved lines feel gentle and peaceful,

For more on how to interpret the lines and shapes in your own doodles, check out: Doodle Meanings.

Whereas curved lines are soft and flowing, straight diagonal lines show tension, anxiety, and excitement. Much like an arrow, a diagonal line can lead us in a specific direction. A single diagonal line might represent strength.

Another of my favorites is a zigzag line. These are usually made with straight lines; I prefer to make mine with rounded lines, creating a scallop pattern. Zigzag lines can be neat and orderly, representing an exciting pathway. They can also be irregular, unrestrained, and wild. Lines like this can represent confusion, chaos, and disorder. When zigzag lines are connected, they form organic shapes which can suggest nature, creativity, and growth.

Now, is there really anything to this? Or are these symbols merely “add-on’s” we point out and talk about when we analyze or interpret a work of art? Do you consciously and deliberately create works using specific lines and shapes? Or, as in the case of my art, do they just “appear” on their own? 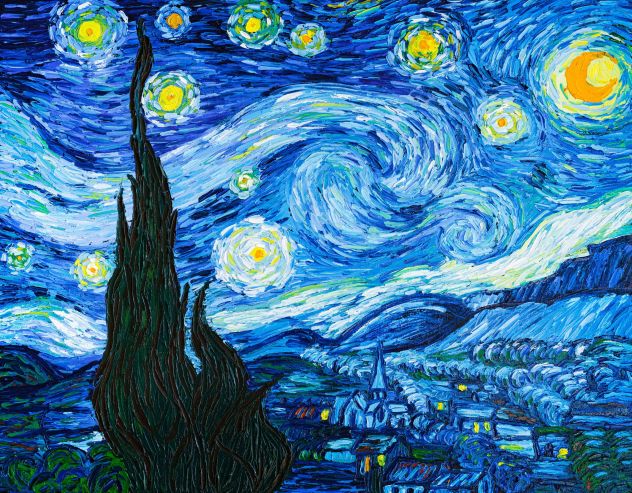 We can see about every different sort of line and shape there is! We have the tall tree acting almost like an arrow to lift our view heavenward. There’s also a church with a triangular steeple. Is it purposely there to symbolize transformation? What of all those curved lines, flowing through the painting? What of the spirals? And the stars themselves? Although they’re not pointed, we know they’re heavenly lights, so do they have a spiritual significance?

I won’t go into a detailed analysis of the painting here. There are many such analyses online, such as this one from Artble or this from VGGallery. These two interpretations are quite different from one another.

I found it interesting to look at lines and shapes as symbolic elements, and I’d love to hear your comments. Do you look for symbols in artworks you view? Do you incorporate symbolism in the art you create? It’s a fascinating topic. Let’s talk about it!