I think everyone probably guessed this one, right? The answer is Pablo Picasso… maybe. Yes, according to the Encyclopedia Britannica, he is known as the creator of cubism, but I found a bit more to the story as I researched the movement. Another artist, Georges Braques, is also a prominent figure in cubism. It was Braques who created what is known as “faceting”.

The technique of faceting originated from Georges Braques – it was his way to depict a natural object. Picasso didn’t so much facet natural objects, but used the geometry of Braques’ faceted paintings to create a style that was abstract in essence, almost pure abstract art. So cubism refers to the styles of both Braques and Picasso, although Braques’ cubism has a recognizable figurative objective, while Picasso’s cubism served as the link between Braques’ style and the pure abstract art that followed from cubism. — From Pablo Picasso’s Cubism Period

More from the site:

Analytical Cubism is one of the two major branches of the artistic movement of Cubism and was developed between 1908 and 1912. In contrast to Synthetic cubism, Analytic cubists “analyzed” natural forms and reduced the forms into basic geometric parts on the two-dimensional picture plane. Color was almost non-existent except for the use of a monochromatic scheme that often included grey, blue and ochre. Instead of an emphasis on color, Analytic cubists focused on forms like the cylinder, sphere and the cone to represent the natural world. During this movement, the works produced by Picasso and Braque shared stylistic similarities.

Below is a painting by Braques, the Houses at Estaque from 1908. This is often considered the first example of cubism, so again, the claim of Picasso creating the movement might be slightly controversial. The Georges Braques website calls him a “co-founder, along with Pablo Picasso.”

And from Picasso, we have many cubist paintings, such as this one, Girl with Mandolin, painted in 1910. 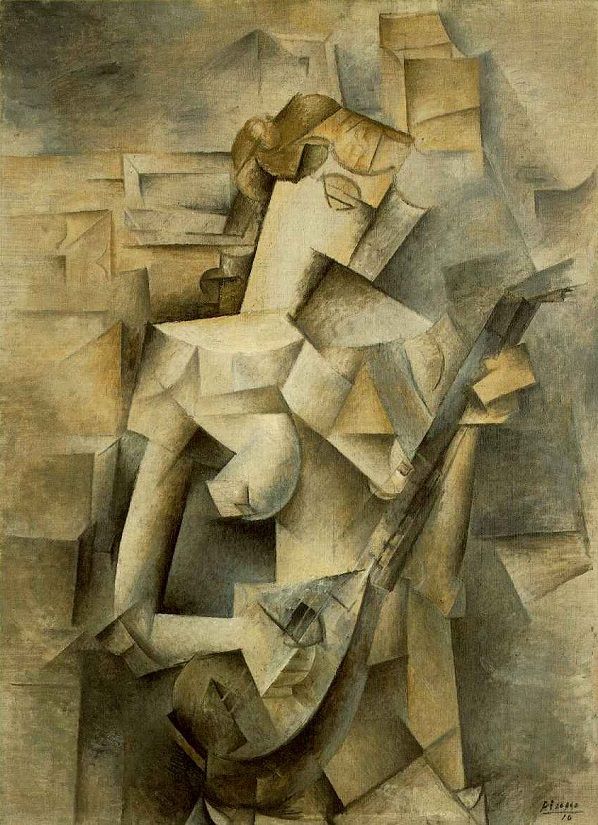 I like the cubist style, and I’ve always associated it with Picasso. Now, however, I’ll also think of Georges Braques whenever cubism is mentioned.

You can learn more about cubism in this article from the Tate: Cubism. It discusses the origin of the movement, how the name came about, and explains the differences between the analytical and synthetic forms of cubist art.

I hope you enjoyed today’s Art Quiz feature. I always like learning new things, so I especially liked this question and answer.