I’ve never seen the movie Jaws, but I’ve heard people quote that line many times. Maybe I’m taking it out of context since I’m not familiar with the film, but it’s always seemed to indicate being fooled by something. Just when you think things are all right, that’s when you suddenly find out it’s all wrong again. Or, in my case, just when I think I really do understand perspective in drawing, that’s when I realize I don’t know anything at all.

This illustration from Art Projects for Kids shows a “city scene” in one-point perspective. 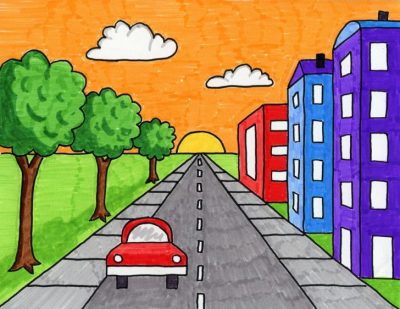 This illustration also makes the purpose of perspective clear: to accurately depict the height, width, depth, and position of solid objects in relation to each other when viewed from a particular point. That’s a rather long-winded definition, and maybe that’s part of the problem. There doesn’t seem to be an easy way to define or explain perspective without a lot of complicated verbiage.

Here, from Art Class Ideas, is an illustration of a city scene using two-point perspective. 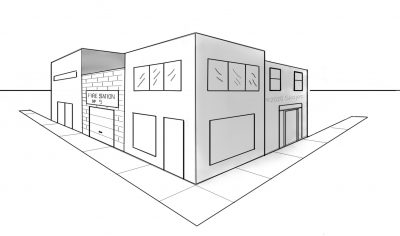 Although not so colorful, it, too, clearly illustrates the principles of perspective. Again, even though we’re using two vanishing points, it’s still all about the correct height, width, depth, and position of solid objects in relation to each other. Our viewpoint here is at a corner, so our parallel lines are going off in two different directions.

All right. So far, so good. I understand all of this. I understand, too, that the horizon line — that first line we’re always instructed to place on our paper when we do perspective exercises — represents our eye level. I know, as well, that when using two-point perspective, our vanishing points aren’t always on the page. What I don’t know, though, is how to apply these rules of perspective when I’m tasked with doing a drawing on my own. I can follow along to re-create images given in an art book, but ask me to draw a scene of my own, and I’m lost. Totally, hopelessly lost.

That’s where I found myself earlier this morning as I was finishing up that “not so favorite” chapter in Barrington Barber’s “10 Week Course for Aspiring Artists“, the book I’ve been using for my summer art projects. The last assignment in the chapter was to draw an interior scene in perspective. I looked at the illustration he included, read through each of his “steps” from beginning to completed drawing, and threw up my hands in despair. Nothing made sense. Obviously he had a vanishing point — somewhere — but it was anything but obvious to me.

In one stage of his drawing, I can see where his lines are converging, but so help me, I can’t even begin to guess why they converge there and how he knew that’s where the vanishing point was supposed to be. To confuse me even more, in the third stage of his drawing he has lines running from left to right, crossing over all those parallel lines headed toward their vanishing point, and I have no idea where these additional lines are going. Here, take a look for yourself. 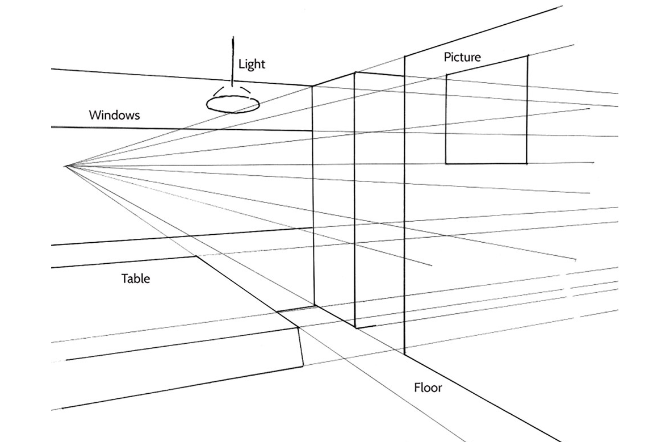 I’m guessing — and this is really only a wild guess — that this is an example of two-point perspective with one vanishing point on the page and another way out somewhere in the east forty. Yeah, fine. But how do we know where it is? How do we use a vanishing point that isn’t even on the page? Theoretically I might understand the concept, but I can’t apply it.

I wasn’t giving up, though. Another point Barber makes in this chapter is that it’s quite acceptable to simplify scenes, especially as we’re learning. Take out any ornate furniture, he suggested. Don’t worry about complicated things. Just keep it simple.

Well, that’s what I did. I chose a corner with nothing more there than a door and a shelf that’s on the floor because I recently bought it and my husband hasn’t hung it on the wall yet. What could be more simple than this scene? 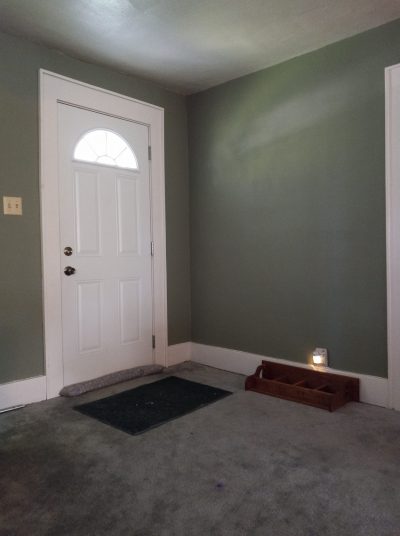 So, sketchbook in hand, drawing pencil at the ready, I sat down, to begin. But… begin where? I note that Barber’s drawing shows no horizon line, so I guess that’s out as a starting point. Well, how about finding my vanishing points. Huh? Really? What vanishing points? I’m simply looking at the corner of our living room, and while I know I could extend parallel lines out that would eventually meet somewhere, they aren’t going to meet up anywhere in this neighborhood, so what use are they?

This is two-point perspective… am I right on that? Since I’m looking at a corner, it would seem so, even though it is concave rather than convex. It’s still the same principle, right? So, where and how do I begin drawing this? I’m guessing that I would have to consider the angles formed by the walls as they extend outward from the corner, but if I’m using angles, what’s the point in having a vanishing point or two? And I still have no idea where any vanishing points would be, so what difference does it make? This surely shouldn’t be so difficult. After all, perspective is supposed to be easy, right?

Well, it’s not. So now, I’m going to go grab a protractor, measure the angles here and see if that helps me get marks on the page. Wish me luck, will you? And will somebody please explain to me how to use vanishing points that are truly nowhere to be seen? As I’ve said many times before, I understand the concept of perspective, but I have no idea how to actually apply it in drawing. Any help will be appreciated!