Didn’t I say my art world was a bit chaotic at the moment? Yes, I did, and yes, it is. So in the spirit of chaotic weirdness, I’m sharing today an artist and painting I recently discovered.

That artist is Odilon Redon, and here is one of his works. Cyclops, based on the one-eyed monster of Greek mythology, was painted in 1914, two years before Redon’s death. 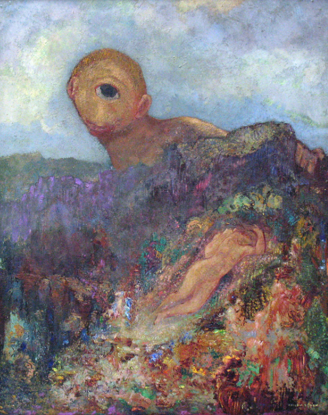 Although I struggle with studies of mythologies, I have read Homer’s Odyssey, and I’ve long been familiar with the Cyclops. When I was a child, back in the days long before “leash-laws”, our neighborhood had a stray one-eyed dog roaming around. My grandfather gave him the name of Cyclops, and being the curious sort, I had to know why. And so it was I learned about Cyclops at a very young age.

I was never frightened by the spectre of this one-eyed giant. In fact, I always felt a bit sorry for Cyclops — both the dog and the mythological giant.

Odilon Redon was born Bertrand Redon. “Odilon” was a nickname derived from his mother’s name. As a boy, he showed talent for drawing. He was later encouraged to study architecture, but found it not to his liking. As an artist, his early works were known as noirs — dark drawings, usually in charcoal. His style was described as being “a synthesis of nightmares and dreams.” He drew and painted fantastical creatures from his imagination, strange beings that arose from his subconscious.

Redon said of his works that they were to inspire, not define.

“They place us, as does music, in the ambiguous realm of the undetermined.” — Odilon Redon

Not all his works were dark or frightening, but all seem to have a dream-like quality of unreality about them. Here, much different from Cyclops, is his painting of Butterflies:

I am intrigued by this artist. I like his colors, and I like the idea of art that can’t be “pinned down” with well-defined ideas. I like imaginative art, and if you’ve read this blog for long, you know I have a fondness for “mosters” that don’t really exist.

During the Sketchbook Revival workshops earlier this year, I learned a bit about surrealism, and through an “Art Quiz” feature, I became interested in Dadaism, as well. I think it’s probably a phase I’m going through, part of the “development process” for becoming a more expressive artist. As I look around at my own “chaotic art” and think of the crazy things I want to do, I’m feeling quite a connection to Odilon Redon. Somehow I want to dig deep down into my psyche, conjure up wild creatures, and splatter canvases with bits and pieces of dreams.

Discovering Redon was exciting to me, and I wanted to share his work here. Maybe you’ve known about him and his art. Maybe I’m not introducing you to anything new at all. For me, though, this has been a thrilling discovery, and I can’t wait to see how Redon’s influence shows up in my work.