Truly I have been hesitant in sharing these thoughts about Henri Matisse. How dare I question him, his talent, his art? He is, indeed, one of the “greats”, a man whose courageous creativity revolutionized the world of art.

After my morning exercises with Matisse and his line drawings, I was in a quandary. In some respects, seeing Matisse’s drawings and paintings left me feeling bolder than ever, more confident that I, too, could call myself an artist, that maybe “drawing ability” isn’t necessarily the pre-requisite for “being an artist” that I’d always considered it to be.

At the same time, I was discouraged, as well. If art means simply drawing lines — without thought for perspective, proportion, values, accuracy — well, then, what’s the point of it? If everything can be called “art”, then nothing is “art”. It’s like those “participation trophies” handed out in contests that make competition meaningless and success insignificant. Why bother with any of it?

I felt my whole world had been turned topsy-turvy. I didn’t know which end was up, couldn’t get my bearings, and had no idea where to go with my thoughts. The only thing I could do, perhaps, was to delve more deeply into the works of Henri Matisse and to explore his art more fully.

Obviously there is something within the drawings and paintings of Matisse that supersedes the rules, the essential elements, the principles on which we determine what is or isn’t art. What was it, precisely, that made Matisse great?

What I found, primarily, was color. As I wondered what methods Matisse employed to turn his line drawings into shapes and forms, my mind went immediately to color. Indeed, when we think of Matisse, what do we think of if not his bold, courageous use of color, his fauvist style, the brightness and brilliance of his paintings?

I’ve never understood Matisse. He spoke about wanting balance in art, about art being restful and soothing, yet he then created works like Woman with a Hat from 1905.

This painting was at the center of the controversy over the “Fauve” movement.  At its exhibition at the Salon d’Automne in Paris, the work — and others of a similar vein — were harshly criticized. A critic of the day said that “a pot of paint has been flung in the face of the public.”

This work is now at the San Francisco Museum of Modern Art. Their website includes an audio file:

“Why did this painting cause a scandal?”

The painting is of his wife, Amelie. Another painting of her also stirred a bit of controversy. It is known as “The Green Stripe” or “The Green Line”. Art historians suggest that Henri and Amelie may have been having marital problems when this was painted. The correct title of the painting is “Portrait of Madame Matisse.”

It is named for the green band that divides the face in half, by which Matisse sought to produce a sense of light, shadow, and volume without using traditional shading. Matisse’s colorism was shocking at the time.

The image has often been called “disturbing”, and I can agree with that. A friend of Michael and Sarah Stein, owners of the painting, once called it “a demented caricature of a portrait.” In 1910 an art critic wrote that the painting was a “punishment” of Matisse’s wife, forcing viewers to see her in “a strange and terrible aspect.”

The more I looked at the paintings of Henri Matisse, the more I questioned my personal definitions of art, and my thoughts about what it means to be an artist. It all sparked a bit of madness in me, taking my newly-discovered ideas about art and artistic freedom and exploding them into a frantic, almost manic expression.

“If Matisse can do it, so can I.” That became my rallying cry as I rushed to my easel and took out a sheet of watercolor paper — the very inexpensive variety. Using what I hoped might be called “long, elegant lines” I drew a portrait, using a Pixabay photo as a reference. Of course, that’s pushing it a bit. I wasn’t going for accuracy. I wasn’t concerned with proportions, perspective, or anything else. I just wanted to boldly put down marks and then fling my own pot of paint onto it.

It’s definitely no work of art. It was, however, cathartic in its own way. I didn’t really concern myself with trying to create shadows or facial structure with colors. I was too busy flinging it on. This was done using my little “pocket set” of Cotman watercolors. 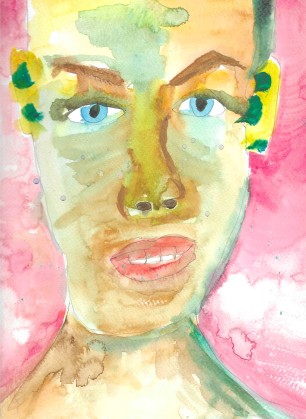 Originally I thought I would go back and erase my pencil lines. I didn’t. My immediate reaction was a bit of a grimace — which is fitting. I set out to create a “fauvist” portrait with little regard for any considerations of art, and that’s what I got.

Yet from a distance — as I sat here looking over at my easel — something about this weird caricature of a portrait haunted me. Even after I left the studio, I found myself coming downstairs again just to look at what I’d created. Something about this speaks to me. It speaks to me of my own art madness, my confusion, my questions about who I am and what art is really all about.

Quite simply, this painting inspires me. Why? Because of its boldness. Because of the freedom I felt. Because it was unplanned and unpracticed. Because it is a true expression of the crazy emotions surging through me.

For me, these are reasons enough to call this art, and as its creator, I then have the right to see myself as an artist. It has nothing to do with drawing skill. It certainly veers 180-degrees from any training. As for talent, I really have none.

But I do have creativity. I am developing some sense of adventure and boldness — courage, even — when it comes to art. I’m learning to take inspiration wherever I find it, and I’m learning that many artists can influence me — Delacroix, Rembrandt, Pissarro, Inness, Degas, Monet, and yes, even Henri Matisse — but in the end, I will still be who I am.

It was shocking — jolting, actually — to have come this far in my study of art, to have patiently read so many lessons and learned so many concepts, only to then be told to throw it all away. A voice inside my head — maybe that of Matisse himself — is saying “You don’t need any of that. You just need to be yourself.”

So true, Henri, so true. Yet I know I couldn’t have come to this point without having learned the rules, the elements of art, the basic principles. They’re still the foundation that holds “art” together, but not quite in the way I’d imagined.

Where this journey takes me from here remains to be seen. All I know is that it’s going to be quite an adventure. More confidence. Fewer apologies. A lot more exploration.