Another month is drawing to a close – as is another year — and I’m ready to move on. Even though winter is not my favorite time of year, I still enjoy celebrating all the holidays with family and friends, and I like that feeling of “closure”, putting one year to rest while excitedly planning for the next.

I’m also glad to be done with November simply because it means I can turn the page on my calendar. For the last month, here is the lovely scene I’ve been looking at: 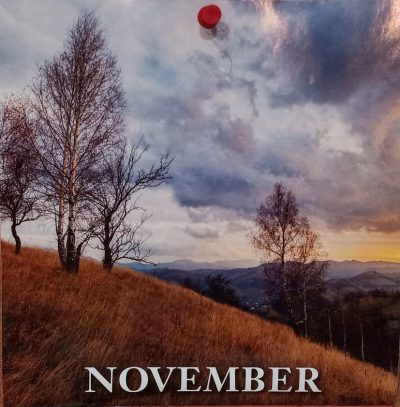 Ah, yes. Beautiful, isn’t it? So you might be wondering why I’m so eager to be done with it! Well, remember that alla prima painting I did recently? This November scene from the calendar was my reference photo, and this — below — was the result. Oh, so sad. 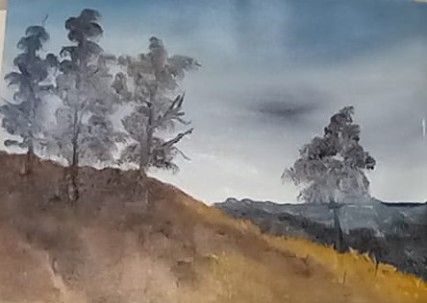 I’ll take credit for at least getting the idea right. It’s a sloping hillside overlooking a valley, and there are a few trees there. That much I got, but I really missed the gorgeous skies, the sense of depth and distance, and as for those trees… well, one thing (among many) that I can’t do is successfully paint thin, fine lines. I’ve wrestled with that problem ever since I started oil painting five years ago. I’m still wrestling.

Early this morning, I looked at the calendar again. The lovely scene taunted me. Really, it looks rather simple, don’t you think? I had a canvas already prepared — toned with acrylic — and I decided to give it one more shot.

In some respects, the results were a little better. In other respects, I still fell far short of what I wanted to create. I did this alla prima as well, only because I was feeling a bit too impatient to set it aside and work slowly. I’ve been away from painting for several days, busy with family and holiday activities. I was ready to jump in and paint something!

Is it better than the first? Yes, a little better, I think. I did get a bit of color in the sky — Naples yellow worked to create a nice glow — but my skies are still a far cry from “dramatic”. Still, all things considered, at least I have a sky. In fact, all things considered, I’m lucky to have a “finished” painting at all. More of that story in a moment.

First, I want to look at the things I like in this painting. Even though I could have added more color to the sky, I do like the bit of yellow-gold “light” I added. I’m also pleased with how I used that same Naples yellow to add light to the edge of the sloping hillside. I think I did slightly better, as well, with creating some sense of depth as we look over the valley. In the photo it’s impossible to see the brush stroke detail in the foreground, but I was happy with a lot of that area, too.

The problem — as always — was painting the trees, specifically trying to paint bare November trees. I’m still trying to find (a) the right brush, (b) the right paint consistency, and (c) the right technique for painting thin, fine lines. If I’m not working alla prima, I can get better results, but with alla prima it seems that no matter what I do I end up removing paint when I try to add fine lines.

I did try several methods and several brushes. I then resorted to “scratching” in trunks, limbs, and branches, using the end of a paintbrush, then trying a palette knife, and even trying a toothpick. At that point, I just shrugged and resolved to play around a bit. I experimented with different techniques to create the illusion of dried leaves — as you can see, I wasn’t very successful.

Oh, but what about the “more to the story” I mentioned above? Well, chalk this all up to a bit of foolishness on my part. I was in such a “hurry up and paint something!” mood that I came to the studio about 6:00 AM, grabbed my toned canvas, and started putting paint on my palette. Ordinarily there would be nothing wrong in doing this, but this morning we were scheduled to pick up our grocery order at 7:00 AM. Before I knew it, my phone was “dinging” to tell me the order was ready. Great!

Except that leaving my studio unattended with a wet canvas on the easel — even for ten or fifteen minutes — was an invitation for disaster. I couldn’t risk having Flower Child — our lovable little rescue cat — jumping on the easel (I use a drawing table with only a slight slant), putting her paws on the palette, tasting the paint, or rolling on my work in progress.

I tried picking up the very wet painting — carefully — and I placed it into an “art box” with lid that I use for precisely this purpose. So far, so good. I also put the paint-filled palette away in a large, lidded container, and I set my brushes in a covered area, too. Mostly I hoped Flower Child would be content to stay upstairs for the short time we were gone.

I berated myself a bit for starting a painting when I knew I’d have an interruption, but, no harm, no foul, let’s just go get the groceries. And all worked out well, really. Within thirty minutes we were home again with all the groceries put away, and I was headed back to the studio while my husband was playing with the cat.

This was the point at which I attempted to paint the trees. This was when I got a little discouraged. This was when I just shrugged off any hopes of re-creating that lovely November scene and just started playing around to see what I could do.

I was unhappy not only with my inability to create thin branches and twigs, plus my sorry attempts at dried leaves, but also with the overall shapes of my trees. I felt that everything was leaning downhill. Oh, well. And wait. There’s still more to the story.

I played around for a while, gave myself a pat on the back for the few little things I liked, and finally decided that there was nothing more I could do — or wanted to do — to improve the painting. Once again, I carefully picked it up. This time I carried it over to the “drying rack” on the wall. I set it there beside its predecessor, and, clumsy me, I managed to drop it. I tried to catch it! But seriously, have you ever tried to catch a very wet oil painting in mid-air? Still being my clumsy self, I missed the catch anyway and the canvas went down to the floor. Which side up? Well, paint side down, of course! How else could it happen?

I picked it up, turned it over, and found a lot of smears, and lots of dirt, dust, and cat hair covering the the scene. I could only shake my head. It wasn’t a good painting, so I hadn’t “ruined” anything, but for goodness sake, I’d spent time on it, and there were a few good things about it.

So I did what I could to salvage it. I had to pick a few pieces of dust out. You can see the streaks in the sky as I “tweaked” things. There were a few flecks of yellow splattered in places, and I liked the effect. I considered taking my Naples yellow, thinning it down, and making more splatters — a bit like falling leaves, maybe?

That might have been fun, and maybe it would have helped, but at that point, I’d had enough. More carefully than before, I carried the painting to the drying rack and set it down. I’d had enough of November.

Now, I’m ready to turn the page on that calendar. I have no idea what beautiful winter scene awaits me, but most likely at some point I’ll decide to try painting it, too. Wish me luck. Hopefully there will be lots of snow but no bare trees. We’ll see.

So, here’s to bidding November a fond farewell, and hoping for a beautiful December.