Let’s cut to the chase with the answer to today’s quiz question:

Gustave Courbet is known as the main proponent of Realism and his paintings challenged convention by depicting unidealized peasants and workers, often on a grand scale traditionally reserved for paintings of religious or historical subjects. — From “Boundless Art History”

Realism in art was in stark contrast to the Romantic movement which emphasized noble sentiments such as the pursuit of liberty, Romantic painters had turned their attention to heroism, to grandeur and glory. They also looked upon nature and man’s connection to it as appropriate subjects for art.

The realists, however, looked at the world around them, not in an idealized way, but as an expression of truth. Urbanization was happening. Industrialization was changing the world. Instead of painting heroes, the realists painted the common man. They painted laborers, stone-breakers, factory workers engaged in everyday activities.

Shown here is “The Stone Breakers” by Courbet. 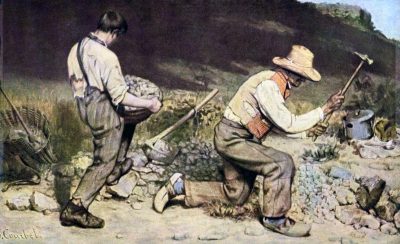 This work — painted in 1849 — showed the hardships workers endured. You’ll note that Courbet does not show the faces of these stone-breakers. Art historians say that this was intended to convey the idea that these men could be any man. Yet Courbet did give each figure individual characteristics in the way they are dressed.

There’s a bit of unfortunate realism attached to this painting, too. It was destroyed during World War II when a transport vehicle transporting 155 paintings to the Konigstein castle was bombed by Allied forces.

In 1861 Courbet wrote an essay which has come to be known as the “Realist Manifesto”. He defined painting as “a concrete art.”

I maintain, in addition, that painting is an essentially concrete art and can only consist of the representation of real and existing things. It is a completely physical language, the words of which consist of all visible objects; an object which is abstract, not visible, non-existent, is not within the realm of painting. Imagination in art consists in knowing how to find the most complete expression of an existing thing, but never in inventing or creating that thing itself.

There is much more to the life story of Gustave Courbet than his art. He was highly political, and his activities eventually led to his arrest and imprisonment. Even after his release, his case was re-opened, and he was fined the exorbitant amount of 500,000 gold francs. His property and paintings were all confiscated. Having no means by which he could pay this fine, he fled France and settled in Switzerland. He died at the age of 58.

Encyclopedia Britannica offers this as his legacy:

Courbet’s reputation has continued to grow since his death. His detractors often judge his art only on the basis of his socialism, ignoring the fact that his political beliefs grew out of his generosity and compassion. His work, however, exerted much influence on the modern movements that followed him. He offered succeeding generations of painters not so much a new technique as a whole new philosophy. The aim of his painting was not, as previous schools had maintained, to embellish or idealize reality but to reproduce it accurately. Courbet succeeded in ridding his painting of artistic clichés, contrived idealism, and timeworn models.

The “Grove Essential Art” series includes. It is available for Kindle from Amazon. 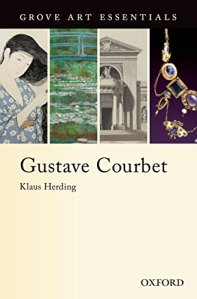 I hope you enjoyed this art quiz feature.