I don’t know that I’d ever been introduced to the term gisant before taking this art quiz. For that matter, other than figurehead, I wasn’t familiar with any of the terms given as possible answers to the question.

The correct choice is, indeed, gisant. The word itself is French and means “reclining”. Encyclopedia Britannica — the source for these quiz questions — provides this information:

…in sepulchral sculpture, a recumbent effigy representing the person dying or in death. The typical gisant depicts the deceased in ‘eternal repose,’ awaiting the resurrection in prayer or holding attributes of office and clothed in the formal attire of his social class or office.

It goes on to discuss variants of gisant sculpture, and shows “Tomb of Cardinal Richelieu” as an example of Baroque gisant. 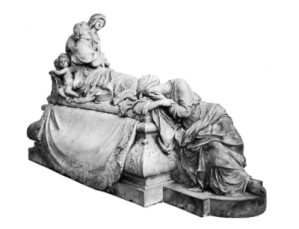 This work is by Francois Giradon. It represents Richelieu dying in the arms of Piety with Doctrine mourning at his feet. Richelieu’s tomb is at the Church of the Sorbonne in Paris.

And what of those other terms? I was curious, so I looked them up.

I found this all very interesting! I love learning new things, so today I had a chance to learn several new terms about art. Definitely a good day!

I hope you enjoyed this “Art Quiz” feature, too.