Is influence the same as inspiration? Maybe at some level the terms are synonymous, but inspiration can be fleeting. It comes and goes; it changes. Influence goes deeper, getting down to subconscious levels of our creative process.

Is influence simply another form of imitation? If we’re influenced by the work of a particular artist or an artistic movement — such as my interest in both Impressionism and Tonalism — do we consciously try to incorporate elements of that style into our own work? Maybe so, but I still think influence is something more subtle, something that happens without us even realizing it.

I did come across an interesting article about artistic influences and attempts to discern them through computer technology and fancy algorithms, but is that even possible? Truly, I have my doubts. So, did the author of the article, writing that “finding influences is a sophisticated process that involves studying the historical, social, and personal context related to the artist and to the art.”

Recently I had an experience that helped me understand the whole concept of influence much better. It was on a “Dr. Fletcher day” — meaning a day on which my husband had an appointment with his retinologist. Due to the Covid protocols in place, I’m unable to go into the office with him. Instead, I sit in the corridor on the third floor, sketchbook in hand. I draw, I paint, I doodle.

Since I’m currently taking part in the 100-Day Challenge, I used my time to do a bit of neurographic drawing. That’s the project I chose this year.

I settled in, made myself as comfortable as I could, and began a neurographic drawing using a black ballpoint pen. Sometimes when I begin one of these drawings, I have something more or less specific in mind. I’ve used a lot of different art therapy prompts as inspirations. I’ve created neurographic drawings for Valentine’s Day and St. Patrick’s Day. On other occasions, I’ve started with other thoughts. But sometimes I begin with absolutely no thought at all! This was one of those days.

I scribbled, just letting my curvy lines go everywhere across the page. I wasn’t thinking about anything. I was just moving the pen over the paper, making marks. Next, I began “making the connections” — a process that involves rounding off any sharp edges. This is the part that always frustrates me. I’ve learned to just shrug off my frustrations and keep going without worrying too much about the process. Then, after this stage of drawing, I always look at what I’ve made and add little touches to places to make it “feel right” in some impossible-to-describe way.

Originally, I’m sure I’d planned to color this neurographic drawing, but after seeing it, I shook my head. Nope. I was leaving this one in black and white. No idea why… it was just how I felt at the time.

As far as my neurographic drawings go, I can’t say that this is a favorite, but it does have a few points of interest, I think.

I wasn’t satisfied, though. I had my sketchbook, I had a set of drawing pencils, and I still had a bit of time to sit and wait for my husband. So, I turned the page and began a second neurographic drawing.

This time, instead of using ink, I used graphite. All of the other neurographic drawings I’d done had been made with Sharpies or an ink pen. But using graphite just felt… well, right, somehow. I was eager to see what I could do with different values of graphite, so I used several pencils.

This was my completed “Graphite Neurographic”. 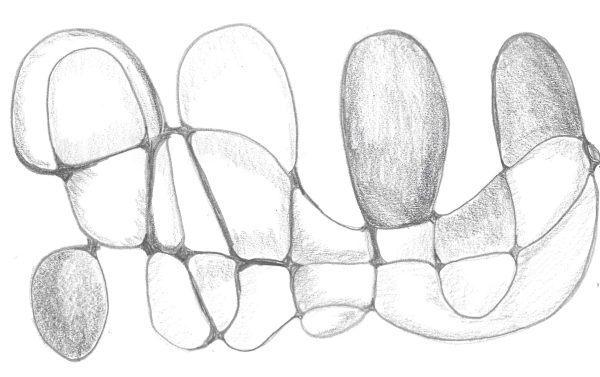 Now, however weird or strange this image might look to you… it doesn’t matter. I liked it. I enjoyed playing with my graphite pencils. I liked this drawing. It was different from all the other neurographic drawings I’d made before.

Of course I knew I wanted to share this in a blog post. I set the sketchbook down on the carpeted floor of the corridor and reached for my smartphone. Here’s the photo I took: 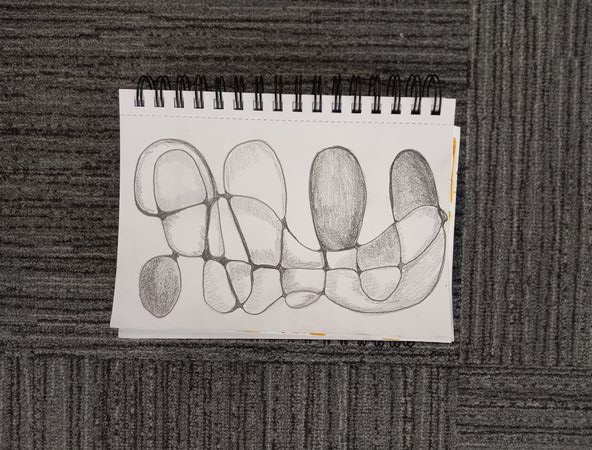 Notice anything here? Notice the varying shades of gray in the carpet? How interesting that for some inexplicable reason I decided to do a neurographic drawing in shades of gray.

Next, as I was picking up the sketchbook I glanced down at what I was wearing. The weather was cool that morning. I’d grabbed a knitted poncho — a black and white knitted poncho to be precise. I snapped a quick photo of the design.

My mind went immediately back to the ballpoint pen neurographic. The part of the drawing that I liked best was that upper left corner.

See any similarities there? I certainly did. I realized then that I’d been subtly influenced by the surroundings, that without consciously thinking about it, I’d literally “drawn” from these different textiles, incorporating various elements into my own art.

All in all, the morning’s impromptu “art time” in the hallway of a medical building taught me a great deal. I won’t go so far as to say that this is how influences always happen, but I know that this is one way in which our art — or music, or poetry, or literature — can be clearly influenced by what’s going on around us.