All the questions in the “Art Quiz” feature are taken from an online art quiz published by Encyclopedia Britannica. They not only the source of the questions, they also provide succinct answers to complex art questions. Rather than try to explain the Bohemian School myself, I will share their “quick summary”.

Bohemian school, School of visual arts that flourished in and around Prague in the later 14th century. Charles IV attracted artists and scholars to Prague from all over Europe. French and Italian manuscripts inspired a local school of book illumination. Though most of the painters are anonymous, their achievements in panel painting and fresco had an important influence on German Gothic art. A vital Bohemian tradition in architecture provided the impetus for the great German Gothic architecture of the 15th century. 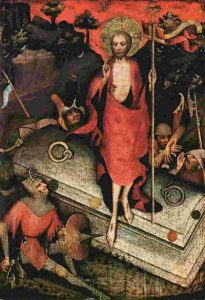 Shown here is “Resurrection” by the Master of Wittingau — also known as the Master of the Trebon Altarpiece. This is one of several artworks he painted for the altar at Trebon. The altarpiece depicted scenes of Christ’s death and resurrection It has now been dismantled. Three panels have survived. Two are in the National Gallery in Prague; a third is in a gallery in the Czech Republic. It is unknown how many panels were originally painted, but most likely there were five works completed.

You can learn more here: Master of the Trebon Altarpiece

I always learn a lot from the Art Quiz questions. I hope you’re enjoying this feature at the blog.