Virtual travel is so pleasant! In real life, I’m not much of a traveler at all. I much prefer staying home, playing in my art studio, and living a quiet life. With the world at my fingertips through the internet, I can quickly and easily go wherever I want, no passport required.

As part of my 100-day creative adventure, I recently visted the Moelwyns, a mountain range in Snowdonia. The range is more correctly known as Moelwynion, which I believe is a Welsh word for hills.

My objective for the project was to re-create this watercolor. I began by making a quick sketch to look at shapes and values. I then drew the basic points on my paper — marking the horizon line and vaguely indicating some trees in the foreground.

Here is my completed version of the painting: 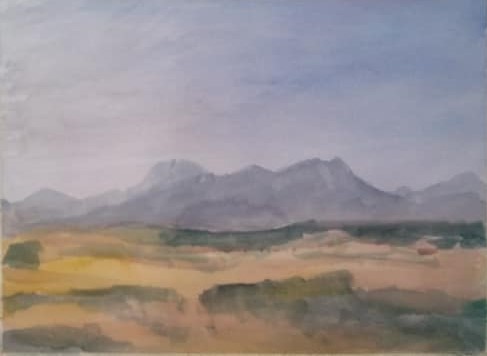 I laid in the sky first using pale reds and blues, later adding more blue to the upper right. Obviously my techniques and my style differ from Phillips. I then moved to the foreground and washed in a burnt sienna — doing it a bit haphazardly. That’s how Phillips work appears to me. I haven’t quite figured out how to do it.

I was working on damp paper, so after those initial washes, I set it aside to dry. I was flabbergasted — and dismayed — to find a huge bloom in the middle of the page the next morning. I hoped the mountain area might hide it. As you can see, it didn’t completely cover it.

On the second day of the project, I practiced mixing my own version of burnt sienna, making it from red, yellow, and blue — with a bit more of the red. For fun, I also mixed a raw sienna, again using red, yellow, and blue, but with a bit more of the yellow. I used these to once more go over the foreground area, trying again for that haphazard look I see in the Phillips painting.

On the third day, I mixed a color for the mountain range, using blue, burnt sienna, and a touch of a blue-green. I was really hoping I could disguise the ugly bloom, but no such luck. I painted in the mountain range, was generally pleased by what I’d done, and instead of letting it all dry again, I decided to finish up the foreground.

I added more green and brown to my mountain color and tried to put in the darker values, using my initial sketch as a guide. The results, I felt, were mediocre. Certainly it could have been worse, but for me, the whole image is so vague that I can’t feel any real depth in the painting.

Another thing I disliked — when I looked at my painting and then at the Aubrey Phillips painting — was that my foreground was very pink. All that red in my self-mixed burnt sienna, I suppose. I liked the color, but I didn’t like the color. In other words, the color was fine, but not for this particular painting. So, I took a pale yellow wash and glazed the entire foreground area.

For comparison purposes, here are both paintings, side by side:

I captured the essence of the painting. I think the mountains are fairly well shaped, and overall I have the general idea. What I don’t have are the variations in values that creates depth and interest. My skies are not as dramatic as those in the Phillips painting, although I don’t really care for those “haphazard” brush strokes he makes. They’re fine for the foreground; I don’t like them in the sky.

I could probably do more on this painting. I could work on it tomorrow, trying to add more shadow to the mountain ranges to give more impressions of light and dark, but I don’t think I’ll go back to it. I think I’m ready to move on and visit someplace else in the world.

Oh, after finishing the painting, I browsed online to learn a little more about the Moelwyns. I found this image. The photo seems to have been taken from about the same vantage point as Aubrey Phillips used for his painting.

Maybe for another project for another time, I’ll paint the Moelwyns again, using this photo as a reference.

It was a nice place to visit, even if I never really left the comforts of home. I have my own homemade picture postcard —  albeit it a rather large one — and I’ve learned a bit about geography as well as watercolor art. I think that makes it a very successful trip.